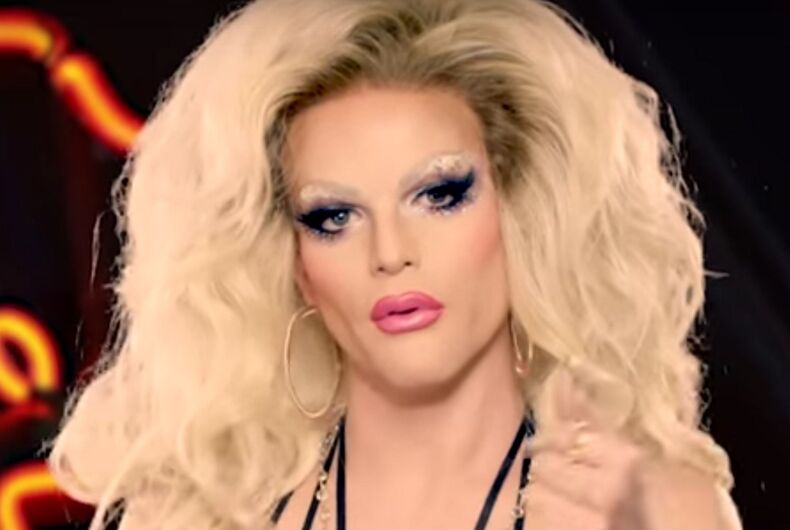 Willam, a contestant on season 4 of RuPaul’s Drag Race, has a show on Fullscreen called Suck Less. A recent transphobic tirade on that show has upset fans.

The show is a live broadcast where Willam and someone else – often another drag queen – take questions from viewers and answer them. Usually the questions are light and Willam takes jabs at the questioner’s appearance.

Part of a recent episode appeared on Reddit. Season 6 contestant Courtney Act was Willam’s guest and they answered a question from a woman who was dating a transgender man. She said that she was worried about being in a relationship with a man who doesn’t have a penis, and said that her boyfriend was “a butch lesbian.” She asked for advice.

Willam’s immediate response does not appear in the Reddit clip, which skips to the part where Courtney says that her response would be “a lot more helpful than Willam’s and a lot less transphobic.”

Willam visibly and negatively responded to being called “transphobic” and then compared the trans man in question to Brandon Teena, a real-life transgender man who was killed in a hate crime and whose story was made into the film Boys Don’t Cry. Willam said that Teena “bamboozled” a girl, implying that he deserved to be murdered.

Courtney continued. “Sometimes men have vaginas, and sometimes women have penises, and that is a fact of the world we live in. Because he does not have a penis, it doesn’t mean that he can’t pleasure you.” Courtney went on to talk about some of the devices and techniques that the emailer and her boyfriend could try.

“Your boyfriend may surprise you,” she said, before calling out the emailer for saying that her boyfriend is a butch lesbian. “If he identifies as a man, then you need to respect his identification.”

Willam then said, “Here’s the thing, he’s not your boyfriend if he’s not a boy and he’s not fucking you.”

“He is a boy!” Courtney interjected.

“Just because someone says they’re a boy, doesn’t make them a boy,” Willam said.

“It’s not up to you to choose how somebody identifies,” Courtney responded.

Willam said, “Just because you cut your titties off and take testosterone, that doesn’t change your chromosomes.”

By the end of the segment, Willam appeared to be less sure of herself. She quipped that Courtney was a “fucking doctor” before saying, “Once you do all that science stuff, then it does [make you a woman].”

Then she sat quietly while Courtney explained what gender identity is.

RuPaul’s Drag Race has featured several transgender women as contestants and had Chaz Bono on as a guest judge. Fans on the subreddit r/rpdr were generally disappointed by Willam’s comments.

“I can’t believe how dumb [Willam] sounded here,” one fan commented. “It was like Courtney was talking to a five year old.”

Another commenter who said he is a trans man said that the video was “genuinely disappointing and hurtful,” and pointed out the irony of the transgender flag being in the background for the entire segment.

Other commenters praised Courtney for calling out Willam’s ignorance. “Between this and her awesome video documenting the process of getting tested for HIV, I really could not love Courtney more,” one fan wrote.

This trans teen was harassed on Twitter. Her comeback was brilliant.

Parents were outraged over a non-binary teacher, so the school removed them