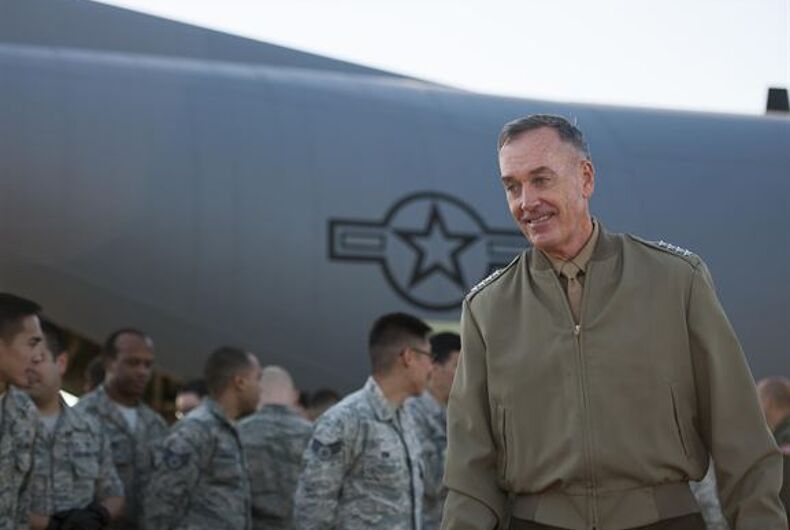 The Pentagon’s top military officer has said he told the Trump administration that it should allow all qualified troops to serve, advice the president ignored by banning transgender soldiers.

“I believe that any individual who meets the physical and mental standards…should be afforded the opportunity to continue to serve,” Joint Chiefs Chairman Gen. Joseph Dunford told members of the Senate Armed Services Committee during Tuesday’s reappointment hearing.

Trump went after trans soldiers first with a tweet in late July, which was then followed up by a formal guidance sent to the Pentagon last month, saying the Pentagon should submit final plans to the White House on implementation of the transgender ban by Feb. 21.

Defense Secretary James Mattis has said that until a panel of experts can review the matter, no one will be forced to stop serving due to gender identity. The panel is expected to come back with its recommendations early next year.

Transgender soldiers were granted the right to serve openly by the Obama administration a year ago.

There has been push back to Trump’s policy from military officials, including Admiral Paul Zukunft, the Commandant of the United States Coast Guard, and Navy Secretary Richard V. Spencer.

Zukunft said that as soon as he was aware of Trump’s tweets, he instructed his office to reach out to the 13 Coast Guardsmen that have self-identified as transgender to show support.

“On a fundamental basis, any patriot that wants to serve and meets all the requirements should be able to serve in our military,” Spencer said.

The ban is currently being challenged in federal court.

Randy Rainbow asks, ‘How Do You Solve A Problem Like Korea?’