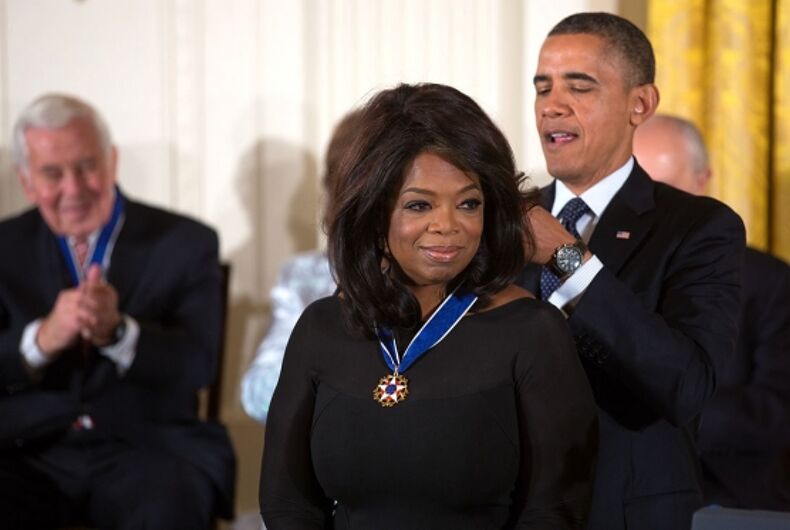 Does Oprah Winfrey have presidential aspirations? It is starting to look like it, as she moves from her decades long stance of laughing off such an idea to seemingly courting it.

The latest development comes in the form of a tweet, fitting right?

Winfrey tweeted a New York Post article by John Podhoretz, headlined, “Democrats’ best hope for 2020: Oprah,” with the comment, “Thanks for your VOTE of confidence!”

@jpodhoretz Thanks for your VOTE of confidence!Democrats’ best hope for 2020: Oprah | New York Post https://t.co/tvt82v8cMH

In the article, which comes in response to her turn as moderator for a 60 Minutes segment where a panel of Michigan voters discussed and debated their political beliefs and differences, he explains why Winfrey might be the Democratic Party’s best bet to defeat President Trump in 2020:

Listening, asking, speaking without judgment, trying to find common ground — it was a superb performance by Oprah, and I use the word “performance” advisedly. She was dazzling in exactly the way that Oprah could always be dazzling, finding a tone appropriate for the moment without being heavy-handed.

If any figure in the United States bears watching over the next couple of years as our political culture continues the radical transformation that led to the election of Donald Trump, it’s Oprah. I believe she’s uniquely positioned, should she wish to commit herself, to seek the Democratic nomination for president and challenge Trump in 2020.

How do you think Donald Trump is doing? Oprah asks voters in Michigan https://t.co/UI7z5pZqJb pic.twitter.com/xoyxEOXV7m

Winfrey has noticed the change in the times as well, helping to explain her apparent change of heart.

In a recent interview with Bloomberg, she said she always thought she didn’t have the experience necessary to run for the highest office in the land. Suddenly, that view has changed, with the election of Donald Trump.

“I never considered the question even a possibility,” she said.

Bloomberg‘s David Rubenstein pointed out that “it’s clear you don’t need government experience to be elected president of the United States.”

And so far, it looks like she would have a real shot at beating Trump. A poll from Public Policy Polling in March showed she would win in a hypothetical 2020 presidential election 47-40.

Winfrey asked Trump about his political aspirations when he appeared on her show in 1988.

He said a lot of the same things then as he is saying now, but told her he didn’t think he would ever run for president, even if he was confident in his chances were he to change his mind.

Oh, and get this, Trump once told Larry King that if he were to run for president he would pick Oprah to be his running mate.

Naturally, his tone will change if she becomes his opponent. Don’t forget that he had nice things to say about Hillary Clinton once, too.