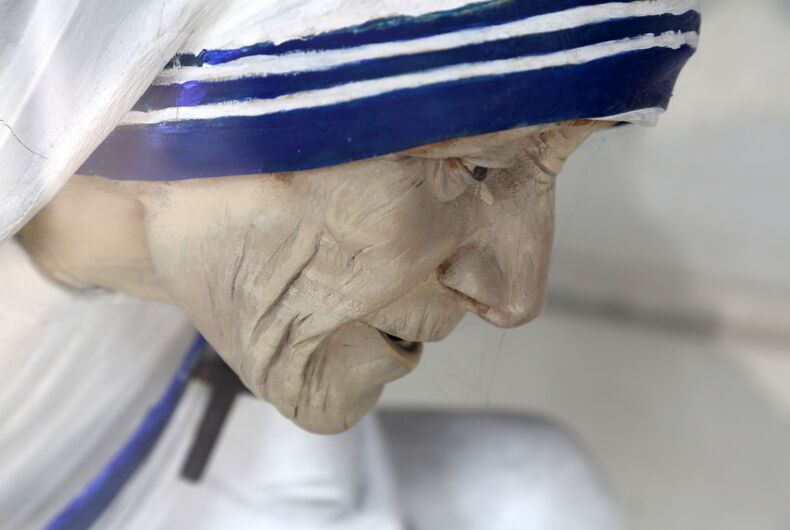 Mother Teresa statue at Shishu Bhavan, one of the houses established by Mother Teresa and run by the Missionaries of Charity in Kolkata, India.Photo: Zvonimir Atletic / Shutterstock

Les côtés ténébreux de Mère Teresa, a carefully-vetted qualitative study about the life and works of Mother Teresa, corroborates many of the most well-known criticisms of the Catholic icon through a rigorous academic analysis of hundreds of documents, including news articles, books, and interviews.

The study, recently published in Studies in Religion/Sciences Religieuses by researchers at two Canadian universities, shows quite clearly that Mother Teresa was no saint. Among her litany of sins, she put the Church’s reputation above people’s well-being, mismanaged donations, and committed countless human rights violations.

Mother Teresa was a celebrity and kept company with other celebrities. Her meteoric rise landed her in the foyers of mansions and at the dinner tables of world leaders. She was able to parlay her reputation for piety and good works into a lucrative fundraising scheme. She raised millions of dollars, ostensibly to fund her charitable organizations. The study found, however, that faulty bookkeeping, secrecy, and incompetence prevent accurate accounting of these considerable financial resources.

Following her death, some accounts were discovered in traditional tax havens, all brimming with cash, their origins and purpose unknown. While it’s impossible to ascertain the motives behind these financial discrepancies (to put it mildly), we can be sure that, while a boy suffered and eventually perished from curable kidney issues in one of Mother Teresa’s houses for the dying (more on those momentarily), no expenses were spared when it came to Mother Teresa’s own health; even the smallest medical complaint led to immediate hospitalization at a top-notch hospital in the United States. Clearly Mother Teresa’s organization had a lot of problems; a shortage of funds was not one of them.

Not only were her celebrity acquaintances great funders, but some served her political goals to improve Catholic standing as well. She famously applauded Baby Doc Duvalier, a totalitarian monster and dictatorial president of Haiti, for his compassion. The study suggests that her motives were more political than metaphysical, in that she was lending support to a member of the faithful; whatever his leadership style, she saw him as a Catholic first and used her prestige to mitigate criticism of his dictatorship. This, despite the fact that he was not only a drug trader, body-part trafficker, and embezzler, but also a practitioner of voodoo and only nominally Catholic.

Every saint has to have two miracles attributed to them in order to make the cut. In MT’s case, a woman diagnosed with stomach cancer rallied thanks (she claimed) to praying to the dead nun for help. The fact that this woman was also being treated by an expert medical team was ignored by the Vatican in order to elevate Blessed Mother Teresa to that auspicious height.

But even before she died, Mother Teresa’s saintly prowess turns out to be more myth than matter. Visiting doctors and former volunteers at Missionaries of Charity facilities criticized the policies and procedures for tending to ill and dying patients. Many were denied care for treatable maladies and perished because of it. Financial reasons were occasionally cited to justify such denials, but the study also found millions of dollars in donations stashed away in Swiss bank accounts, rendering such claims dubious at best.

Some patients were prevented access to pain-relieving medication because such treatments were anathema to Mother Teresa’s theological beliefs. “There is something beautiful in seeing the poor accept their lot, to suffer it like Christ’s Passion. The world gains much from their suffering,” she said.

But the sadism doesn’t stop there. Researchers uncovered accounts from former missionaries who were instructed to perform last-minute baptisms on dying Hindus and Muslims. After all, Mother Teresa’s mission was not to improve the material wellbeing of the sick, but to heal their souls. It was not to rescue people from poverty, but to secure them the riches of heaven. What better way to do this than to maximize their suffering and want in imitation of Christ, and to baptize heathens for the sake of their salvation?

Palling around with dictators, hoarding money, forcing sick people to suffer and die – these are hardly the acts of a saint. So why does everyone think she’s so wonderful?

The Myth of Mother Teresa: A PR Coup

The Canadian study helps us understand that this is more a matter of competing narratives than conflicting facts. Two distinct stories have been told about Mother Teresa, each championed by a prominent British media personality.

The first has the advantage of primacy bias: it got there first. Its downfall is total disregard for the facts. This account was spearheaded by Malcolm Muggeridge, a fanatical Catholic who played a kind of Henry Higgins to Mother Teresa’s Eliza Doolittle. He used his bully pulpit to catapult her to the world stage through controlled coverage and manipulated journalism.

Muggeridge set out to spread an uncritical account of Mother Teresa’s life and actions in order to improve the reputation of the Catholic Church and further its aims.

The other figure, famed polemicist Christopher Hitchens, reported on Mother Teresa’s flawed character and countless abuses, but the public largely ignored or dismissed him on account of his inimitable acerbity. As much credit as Hitchens’ journalism deserves, he undermined its credibility by sensationalizing its delivery. (Titling your polemic about a popular nun The Missionary Position, and following it up with a documentary called Hell’s Angel, may hurt your chances at persuading the public.)

Still, this scrupulously-researched study goes a long way toward vindicating Hitchens’ narrative and discrediting Muggeridge’s overt propaganda, for the simple reason that the facts are on Hitchens’ side. One prominent example of the active myth-making on Muggeridge’s part: When a documentary crew filmed the dark interior of one of Mother Teresa’s houses of the dying, Muggeridge ascribed the picture’s puzzling clarity to the nun’s holiness, even thought the cameraman later explained that he had used a new type of film specifically engineered to capture better images in poorly lit environments.

The study enumerates other such assertions intended to paint a portrait of the Saint of Calcutta – a portrait, the converse of Dorian Gray’s, which masks the sins of its subject.

Who’s Responsible for the Myth?

A mythology of this kind relies on immoral people with political agendas dedicated to the proposition that the ends (the canonization of an immensely public figure) justify the means (the distortions and omissions outlined above). But it also relies on a public willing to blithely accept the lies they are told.

The main purpose of this study is not merely to present the reality of Mother Teresa (which gravely contradicts the saintly image most people have of her), but to make clear that that reality was present from the very beginning, and that a more judicious and skeptical public could have prevented this lie from reaching mythic proportion. Among the most pitiable victims of this lie is the Catholic Church itself, which, if it truly values the institution of sainthood, will revoke its approbation of a proven fraud.

The world needs heroes, and, while they do not have to be perfect, they should at least be good. Mother Teresa was neither.

This article was originally published on Bilerico in 2013.

These shameful colleges are the absolute worst for LGBT students