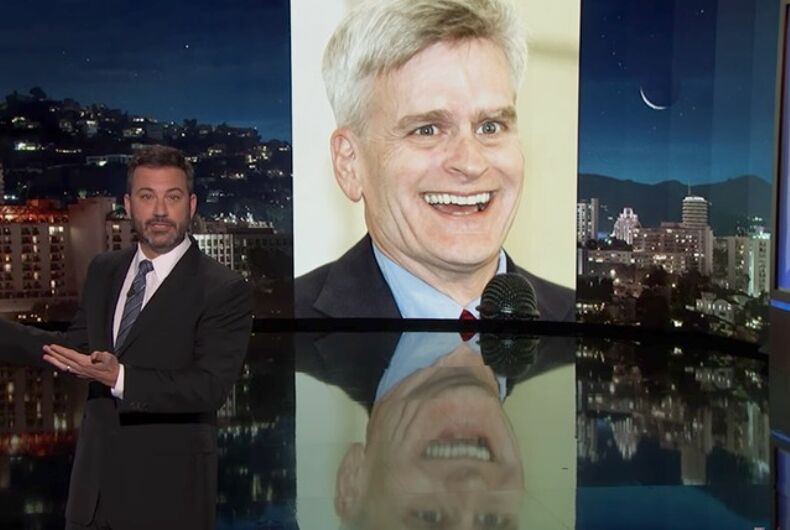 Jimmy Kimmel has become a leading voice in the late night television world in the push back against Republican efforts to kill Obamacare and replace it with something horrific. And like the GOP, he’s not done yet.

Republicans are still trying to attack healthcare, attempting to push a bill through without a complete CBO score to beat the September 30 deadline. One of the namesakes for the effort, called the Graham-Cassidy bill, is Sen. Bill Cassidy of Louisiana, who appeared on Jimmy Kimmel Live! earlier this year to promise that any healthcare legislation he proposed or got behind would have to meet what he called the “Jimmy Kimmel test.”

Kimmel’s son was born with a congenital heart condition, and his life was saved after undergoing surgery. Cassidy promised Kimmel that he would not back legislation that capped coverage, or penalize for preexisting conditions, so that children like his could get the care they need even if their parents isn’t a famous TV personality.

The Graham-Cassidy bill does not live up to those promises, and Kimmel called Cassidy out for his blatant dishonesty.

“He said he wants coverage for all, no discrimination based on preexisting conditions, lower premiums for middle class families, and no lifetime caps. And guess what? The new bill does none of those things,” Kimmel noted.

“Most of the Congresspeople who vote on this bill probably won’t even read it. And they want us to do the same thing,” Kimmel told his audience. “They want us to treat it like an iTunes service agreement. And this guy, Bill Cassidy, just lied right to my face.”

“And by the way, before you post the nasty Facebook message saying I’m politicizing my son’s health problems, I want you to know, I am politicizing my son’s health problems, because I have to,” Kimmel added. “My family has health insurance. We don’t have to worry about this, but other people do. So you can shove your disgusting comments where your doctor won’t be giving you a prostate exam once they take your healthcare benefits away.”

Kimmel urged viewers to contact their elected representatives at 202-224-3121, and laid down a new test for Cassidy.

“There’s a new Jimmy Kimmel test for you, it’s called the lie detector test. You’re welcome to stop by the studio and take it at any time,” he concluded.

Watch the beautiful take down below.

The 10 best books every bisexual should read