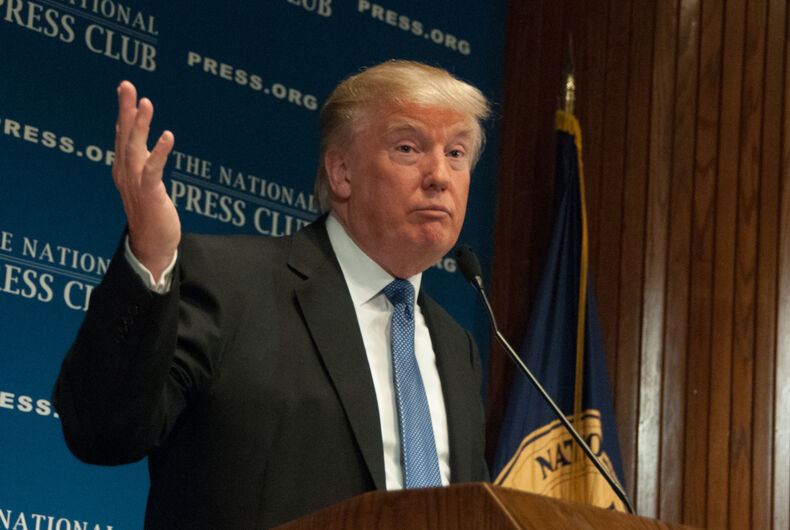 Wouldn’t you love to see one of these NFL owners, when somebody disrespects our flag, to say, ‘Get that son of a bitch off the field right now, out, he’s fired. He’s fired!’ [loud applause] You know, some owner is gonna do that….[These owners are] friends of mine, many of them….They’ll be the most popular person in the country.

Though I have never supported the game of football, I have always supported the constitutional rights of its players and attempts to make the game safer and less potentially physically damaging and deadly. Donald Trump’s attacks on primarily black NFL players like Colin Kaepernick and several others for asserting their First Amendment rights compels me to say with confidence and conviction that Donald Trump speaks and practices racism on a regular basis.

He spewed his latest toxic utterance of racist red meat in front of his overwhelmingly white conservative rally crowd on Friday, September 22 at Huntsville, in the former slave-practicing and Jim Crow-enforcing state of Alabama. Trump appeared at a rally in support of Luther Strange in the Republican primary to fill the Senate seat of his Attorney General Jefferson Beauregard Sessions, whom the late great Senator Edward F. Kennedy referred to as a “throw-back to a shameful era” and as a “disgrace” for his reported racist remarks when he served as a U.S. attorney for the southern district of Alabama.

With all the natural disasters plaguing the planet – the numerous hurricanes and earthquakes ravaging millions of lives and destroying property well into the multiple billions of dollars – Trump chose to attack NFL players rather than talk about the pain and suffering of people lives and the efforts underway to offer aid and comfort.

It comes literally as no surprise by now to anyone that Donald Trump painted neo-Nazi racist and anti-Semitic white supremacists and KKK marchers in Charlottesville with a kinder and gentler brush than he did with law-abiding black NFL players who demonstrated for a more just and equitable society.

On the same evening, Trump also criticized the newly instituted NFL rules compelling players to ease up on excessive tackling over concerns for brain concussions leading to life-long and often life-ending damage.

Hey Donald, I’d like to see you enter the field and experience professional football players tackling you unrestrained at high velocity speeds. I wonder what you would think then about the new procedures.

The day Donald J. Trump descended the escalator in his tower of gold, with head raised arrogantly forward as he held court at his press conference announcing his run for the presidency, he tossed down the bodies of Mexican people, as if they were juicy Trump steaks, as his initial stepping stones on his compassionless and brutal march to the White House.

The US has become a dumping ground for everyone else’s problems. [Mexico is] sending people that have lots of problems, and they are bringing those problems to us. They are bringing drugs, and bringing crime, and they’re rapists.

Before run, Donald Trump, arguably the most prominent of the so-called “birthers,” continuously accused President Obama of illegitimacy as Commander in Chief by claiming he was born outside the United States, even well after the President released his official birth certificate. This along with Trump’s supposed investigations into Mr. Obama’s time spent in Indonesia as a child, and inquiries into his African roots on his father’s side coexist as not-so-veiled xenophobic and racist threats and insults.

Throughout the remainder of his jaunt to the White House up to today, he has stepped over the bodies of Muslims, Jews, women, black people, Latinx people of all nations, activists in Black Lives Matter since they did not matter to him, people with disabilities, bodies that do not fulfill his rigid standards of feminine beauty, prisoners of war, Gold Star parents, women who have the audacity to fight to control their own bodies and their own lives, transgender people of all ages, couples in same-sex relationships, invading “alien” immigrants, dreamers…. In short, anyone and everyone who disagrees with or criticizes him.

His appeals to “nationalism,” presented in the guise of “populism,” feeds on people’s fears and prejudices. He has already rolled back many of the rights and protections minoritized peoples have tirelessly fought for over the decades: reproductive rights, transgender rights, voting rights, citizenship rights, anti-torture guarantees, rights of unreasonable search and seizure, rights of assembly, disability rights, freedom of religion, possibly soon marriage equality, and environmental protections of all kinds.

Recall, as well, his father Fred Trump and his refusal some years ago to rent Trump properties to black people, for which they were sued and eventually signed a consent decree.

The NFL and our players are at our best when we help create a sense of unity in our country and our culture. There is no better example than the amazing response from our clubs and players to the terrible natural disasters we’ve experienced over the last month. Divisive comments like these demonstrate an unfortunate lack of respect for the NFL, our great game and all of our players, and a failure to understand the overwhelming force for good our clubs and players represent in our communities.