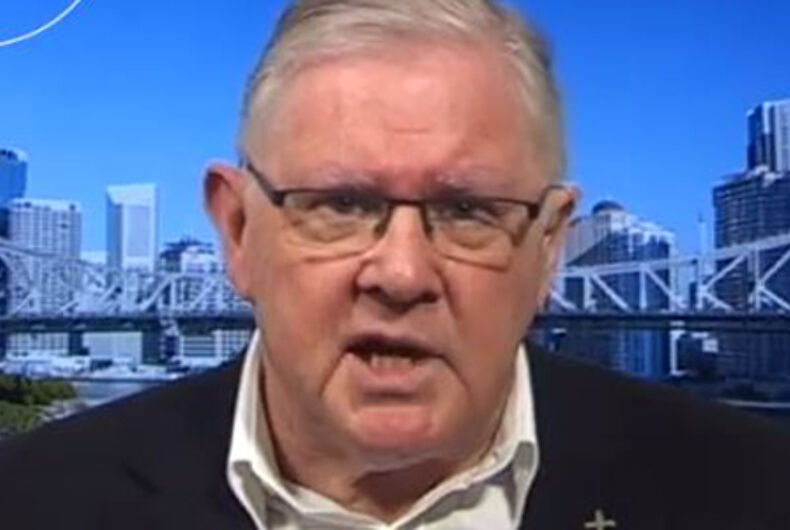 The Archbishop of Brisbane, Mark Coleridge, has said that same-sex couples should not be allowed to get married because they cannot love each other as anything more than friends.

Coleridge made the comments on an appearance on ABC News, where he argued against Australia granting marriage equality.

The issue is currently being hotly debated, as the country is in the midst of a non-binding, nationwide postal survey. If the majority of Australians vote in favor, as is expected, parliament might take it up.

“Parents can’t marry their children,” he added, deflecting to another topic entirely.

When he’s called out on his bullshit, he attempted more spin, pointing out that siblings can’t marry, which is just the same issue of incest he already raised, and still unrelated. He also mentioned that those who are underage can’t marry, yet another false equivalency.

Coleridge then declared that “marriage is about children,” ignoring all the heterosexual couples out there who cannot or do not wish to have them.

“But it’s not just about that,” he continued. “It’s also about the love of the spouses. The two go hand in hand.”

He then admitted that same-sex couples can love one another, but it’s not equal to the love opposite sex couples feel.

“That love is like the love of friends,” he declared. “It is love and it is valuable, but it’s not and it can’t be, the kind of love that we call marriage.”

And you, Mr. Coleridge, with your hateful rhetoric that will bring pain to LGBTQ people, are not, and can’t be, a man of God.

Watch a segment of the interview below.

7 arrested in Egypt for raising rainbow pride flag at concert