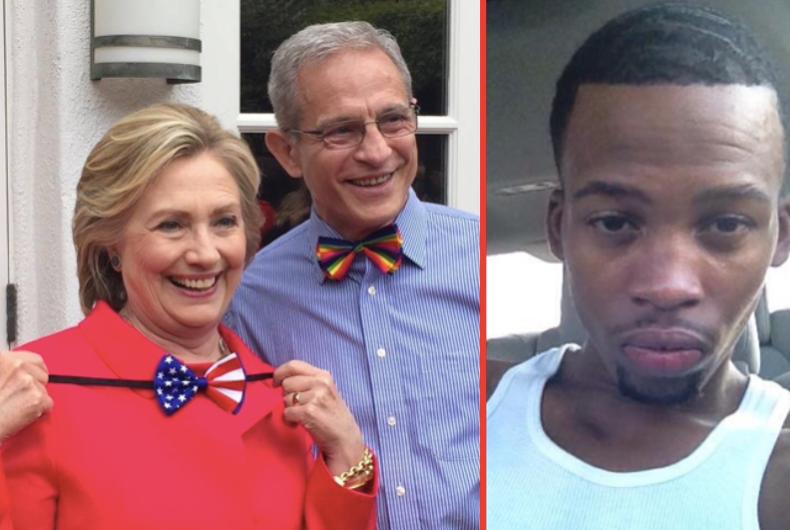 This is pretty dark.

The Los Angeles County Coroner has declared the cause of death for 26-year-old Gemmel Moore as an accidental meth overdose. But his family in Texas isn’t convinced of the findings.

A little backstory: Moore was found dead on the evening of July 27 at the West Hollywood home of Ed Buck, a one-time-Republican-turned-high-profile-Democratic-Party-donor and political activist. Over the years, Buck established a reputation around town for making financial contributions to both the state and city Democratic Party, as well as serving as chair of the Stonewall Democratic Club’s Political Affairs Committee.

But Moore’s mother, LaTisha Nixon, says there’s a dark side to Buck few people know about.

In a shocking interview, she tells the WeHo Times that her son was unemployed and had recently been doing sex work, and that Buck was one of his regular clients. But their relationship wasn’t your typical gigolo/john relationship.

Nixon claims the wealthy liberal activist has a fetish for getting young Black men high, and he used her son to meet other guys.

“[Buck] would have my son to go out to… Santa Monica Boulevard looking for young gay black guys so he could inject them with drugs, see their reaction and how [they] would react and take pictures of them.”

But it doesn’t stop there.

“[He] would supply heroin, meth and other drugs to him to smoke or use with a needle,” she alleges. “Buck would pleasure himself at the sight of my son using drugs.”

She says friends of Moore’s told her Buck “would excitedly encourage [Gemmel] to increase his dosage by saying, ‘more, more, and I’ll give you $500 more.’”

Another alleged client of Buck’s and close friend of Moore’s, a man by the name of Cameron, tells the WeHo Times that Buck seemed to “get off on getting you higher and higher.”

He also recalls a time when Buck allegedly asked him if he had ever “slammed,” a street term for shooting up meth.

“I told him no, and that would take more money,” Cameron said, describing Buck’s reaction as “excited.”

Buck, who gave $2700 to Hillary Clinton’s campaign in 2015 and another contribution in 2016, has not responded to requests for comment.

Nixon says she’s doubtful he will be held accountable for his alleged actions given his extreme wealth and political connections.

“To shoot young guys up with who knows what is evil,” she says said. “I honestly want him to go to jail and serve time to think about what he did.”

Was Trump trying to deflect from Russiagate with his surprise trans military ban?