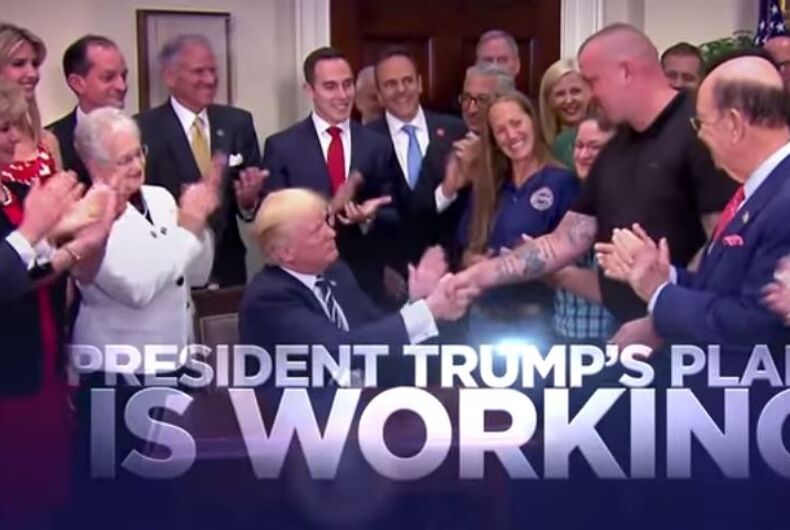 President Donald Trump criticized violence “on many sides” after neo-Nazi white supremacists rolled into Charlottesville, Virginia to throw a fit over the planned removal of a statue honoring a slave owning, traitorous loser.

He has failed to condemn the white nationalist scum that helped get him elected and the violence they brought to the city, resulting in three deaths and countless injuries.

His denouncement of violence without specifics was read by neo-Nazis as a sign that he is on their side.

And if you needed more proof that Trump only cares about himself and his own ends, he released an ad for his presidential re-election campaign, which got underway as soon as he was inaugurated for his first term.

In it, Trump trashes his “enemies,” which, surprise, surprise, he considers to be the Democrats and the media. It fits his typical demagogue style of framing everything as an epic battle of good and evil, and as presenting himself as the unfairly smeared Dear Leader who is just trying to help America out of the goodness of his heart.

The ad also praises Trump for an improved job market, the credit for which actually belongs to Obama. Trump hasn’t been in office long enough to claim responsibility for those numbers, especially since his legislative accomplishments have been largely absent as he struggles to fight the ever growing Russia scandal.

It also brags about the current state of the stock market, and claims Trump has made the military stronger. Trump recently tweeted that transgender soldiers would no longer be allowed to serve in the military.

Watch the campaign ad below.