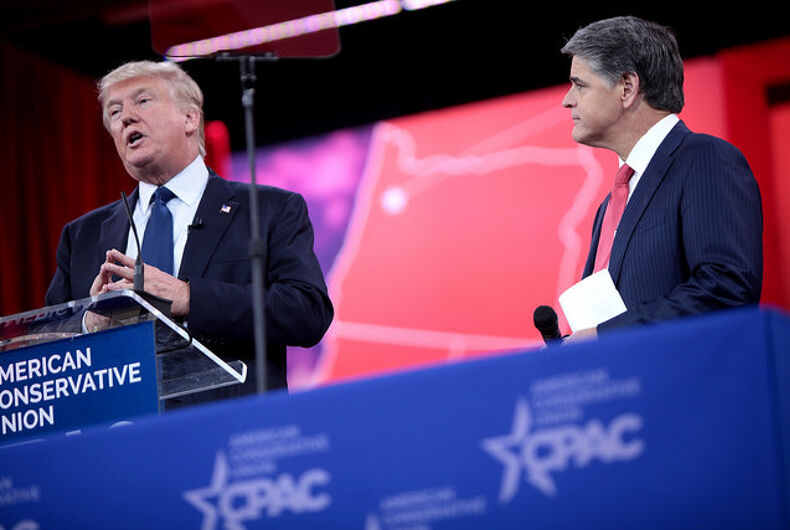 President Donald Trump knew about a since retracted Fox News story about a murdered Democratic National Committee staffer before it was published, and encouraged the network to run with it, a lawsuit alleges.

Trump is also said to have pushed for the report in order to distract attention away from the investigation into his campaign’s collusion with the Russian’s during the 2016 presidential election.

Seth Rich was killed in what appears to have been a botched robbery. The case remains unsolved, and conspiracy theorists pounced on it during the election, with a variety of claims made, none of which were backed up with any solid evidence.

In the suit, former Fox News contributor, Rod Wheeler, accuses reporter Malia Zimmerman, “with the knowledge and support” of Trump backer Ed Butowsky, of making up two quotes from him suggesting he knew of evidence that Rich may have coordinated with Wikileaks on sharing Democratic Party emails last year.

It also states that Trump knew about the story and wanted it to run.

The lawsuit includes a text that Butowsky is said to have sent to Wheeler, reading, “Not to add any more pressure but the president just read the article. He wants the article out immediately. It’s now all up to you. But don’t feel the pressure.”

“Butowsky and Zimmerman hoped that, if they could shift the blame for the DNC hacks from the Russians to Seth Rich, this would undermine reports of collusion between Russia and the Trump Administration,” the lawsuit states.

Fox published the article on May 16, and retracted it just one week later, saying in a statement that it was “not initially subjected to the high degree of editorial scrutiny we require for all of our reporting.”

White House press secretary Sarah Huckabee Sanders said on Tuesday that Trump had “no knowledge” of the story, and said implications that the administration was in any way involved with it are “completely untrue.”

Fox’s president of news, Jay Wallace, told NPR, who broke the story, that there was no “concrete evidence” that Wheeler was misquoted in the story.

Butowsky offered to pay for Wheeler to investigate the death, and a month before the story ran the pair met at the White House with then-press secretary Sean Spicer to brief him on the developments they were supposedly uncovering.

Spicer admits to taking the meeting, saying he did so as a favor to Butowsky. He has also said that he knows of no contact between Butowsky and Trump.

Butowsky has claimed that he did not show a draft of the report to Trump, and that he was merely joking when he claimed otherwise.

Sean Hannity was one of the network’s leading voices in pushing the conspiracy, leading many to call for his firing. He said he stopped talking about the issue “out of respect for the family’s wishes.”

Wheeler, who is black, is also suing for racial discrimination, claiming white employees were paid more and given more opportunities.