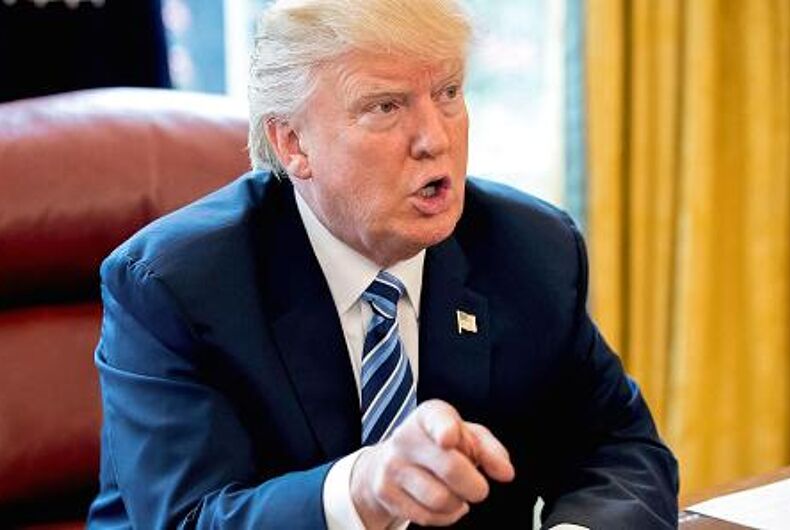 Since the election of Donald J. Trump, the reported incidents of hate crimes in nine metropolitan areas increased by more than 20% according to a study conducted by Brian Levin, professor of criminal justice at California State University at San Bernardino for the nonpartisan Center for the Study of Hate and Extremism. This research shows a reversal of a previous trend of fewer hate crimes across the nation just a few years earlier.

In addition, the Southern Poverty Law Center, an organization that monitors hate groups and crimes throughout the U.S., found a spike in the number of hate groups, especially anti-Muslim, “for a second year in a row in 2016 as the radical right was energized by the candidacy of Donald Trump.”

The day Trump descended the escalator in his tower of gold, with head raised arrogantly forward as he held court at his press conference announcing his run for the presidency, he tossed down the bodies of Mexican people as if they were red Trump steaks, as his initial stepping stones on his compassionless and brutal march to the White House.

“The US has become a dumping ground for everyone else’s problems. [Mexico is] sending people that have lots of problems, and they are bringing those problems to us. They are bringing drugs, and bringing crime, and they’re rapists.”

Before his declared run, Donald Trump was arguably the most prominent of the so-called “birthers,” continually accused President Obama of illegitimacy as Commander-in-Chief by claiming he was born outside the United States – even after the President released his official birth certificate. This, along with Trump’s supposed investigations into Mr. Obama’s time spent in Indonesia as a child and inquiries into his African roots on his father’s side, coexist as not-so-veiled xenophobic and racist threats.

Throughout the remainder of his jaunt to the White House up to today, he stepped on the bodies of Muslims, Jews, all women, black people, Latinx people of all nations, activists in Black Lives Matter (since they do not matter to him), people with disabilities, bodies that did not fulfill his rigid standards of feminine beauty, prisoners of war, the military in general and military generals whom he knows more about how to defeat ISIS than, Gold Star parents, women who have the audacity to fight to control their own bodies, transgender people, lesbian, gay, and bisexual people, couples in same-sex relationships, invading “alien” immigrants, and DREAMers. In fact, anyone and everyone who disagree with or criticizes him.

Neither Salvador Dali nor Franz Kafka, in the farthest outreaches of their brilliant imaginations, could have ever drawn or written more grotesque or surreal images of the United States in the Trumpian era. Albert Camus comes closest in his masterpiece, The Plague, symbolizing the development and spread of Euro-fascism. But while the plague ultimately diminished and receded virtually on its own after running its course, the plague of exploited fear, hatred, and scapegoating unleashed by Donald Trump that sickens our nation will not subside merely by itself.

No, in our noble experiment that we call the United States of America, it will take an aware and thoughtful electorate to move us forward, especially during these times of regression and moral decay.

Going from Obama to Trump has brought about a national collective whiplash: from the forward motion of the Obama administration regarding the advancement of civil and human rights to the backward and downward direction of the Trump presidency.

Trump’s statements, policies, and actions, coupled with his cabinet and other staff appointees like Steve Bannon, Stephen Miller, and Sebastian Gorka have resulted in furthering the already deep skid marks across the landscape, and a collective fracture and anxiety on the body politic.

From what Trump proposes and his manner of presentation, he has continued his radical descent from his golden escalator to the lowest bowels of rhetoric and hurtful policy positions.

This Republican president has exhibited and appealed to compulsory markers of hyper-masculinity like rugged individualism (“I alone can fix it!”), appeals to extreme nationalism to defend our country from the imaginary invading hoards, objectification of the female body both in language and in alleged deed, and to base notions of tribalism of us versus all “others.”

Donald Trump has no difficulty calling out those he sees as his political opponents, even within the Republican party, and he jumps quickly to label bombings and trucks or cars plowing over people in Europe as “radical Islamic terrorists” – even well before the evidence is collected. He talked in vague terms, though, about the murderous actions by neo-Nazis, neo-Confederates, and other white supremacist groups in Charlottesville recently, and he refused to call out the perpetrators’ groups by name.

On the other hand, we can take pride in the words and deeds of Virginia Governor Terry McAuliffe who stated in clear and certain terms that “all the white supremacists and Nazis who came into Charlottesville” need to “go home and never come back.”

Governor McAuliffe and all the righteous counter demonstrators who stood up to bigotry deserve our respect and admiration by intervening and by stating in a collective voice of solidarity, “not in our town.”

Trump has excited the worst in the human psyche. But Trump has merely served as a tool – a toxic catalyst – that has revealed the iceberg of the largely submerged resentment and fear of the “other.” By his example, he has given others permission to reveal their own xenophobic beliefs with strength and even with pride.

The reality is that these domestic terrorists are already home. They live in the state of Virginia. They live everywhere throughout the Divided States of America. They live down the street from each of us. Some of them serve on our local school boards, and police forces. Some of them teach our children and help us fill out our tax forms.

Expressing outrage toward the extreme racism, antisemitism, xenophobia, misogyny, heterosexism, and ableism of the neo-Nazi white supremacist political right is necessary. However, it is ultimately not sufficient to cure the plague of hate perpetuated ever since the first Europeans stepped foot onto what is now known as North America.

From Columbus to the colonists, from the killers and exploiters of First Nations peoples and the slavers (which included many of the “founding fathers), to the white supremacists of the Jim Crow South and across the nation, all the way to the image we see each time we stand in front of the looking glass, we the people of the United States have a long-entrenched legacy of hate, a legacy that each of us has internalized to varying degrees along a wide spectrum.

So, yes indeed, we need to stand up to hatred when we perceive it, for when we do not, we collude in the oppression. We must call out the President of the United States for his incapacity to provide moral leadership within our severely traumatized nation.

However, we must dig deeper and further if we, as a nation, are to turn a corner and begin to heal from our history. For it is often easier to interrupt the external hatred than it is to look inside at the ways we as individuals have internalized the bigotry to which we have been exposed.

But unless and until we also do our “personal work,” we will remain a fractured nation, preventing us from attaining our stated goal of E Pluribus Unum.

Editor’s Note: This story was corrected to say that Albert Camus wrote The Plague.