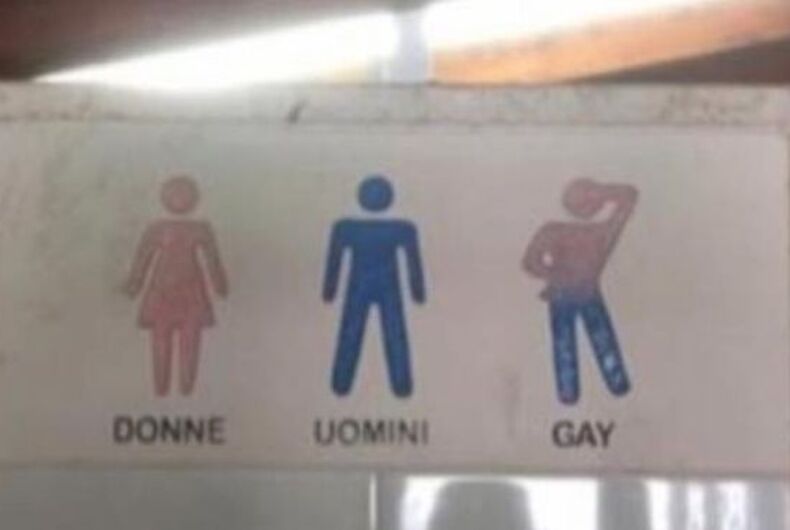 A B&B in southern Italy is under fire for a strange sign posted in front of its bathrooms.

The sign at Le Camporelle di Cavallino in Lecce, Italy, is a play on the common “Men” and “Women” stick figure signs for restrooms. This version divides people into three genders: women, men, and “gay.”

The owners of the B&B say that the sign must be at least 15 years old, but someone recently took a picture of the sign and distributed it on social media.

Lea, an LGBTQ organization in Lecce, released a statement calling the sign “homophobic.” “It goes without saying that there are still cases of this type in 2017, where there is a great confusion between gender identity and sexual orientation.”

The owners of the B&B say that the sign is from the previous owners, and instead of removing it they just covered it. “Someone had fun climbing up to that height and peering under the cover, then photographing the sign as it was fifteen years ago,” they told Repubblica.

The sign couldn’t have always been covered, though, since a Trip Advisor review from last year mentions it.

Despite Lea’s demand for an apology, the owners refuse. They say that “having removed that sign is worth more than a thousand apologies.”

The owners say that they don’t even understand the sign, since there are only two bathrooms and both are unisex. Of course, the sign’s purpose is not to make sense – either as a statement about gender identity or about the bathrooms at the B&B. It’s a joke at the expense of gay people, and bigoted jokes often don’t make any sense.

Weekly Debrief: A win in Texas, but losses nationally