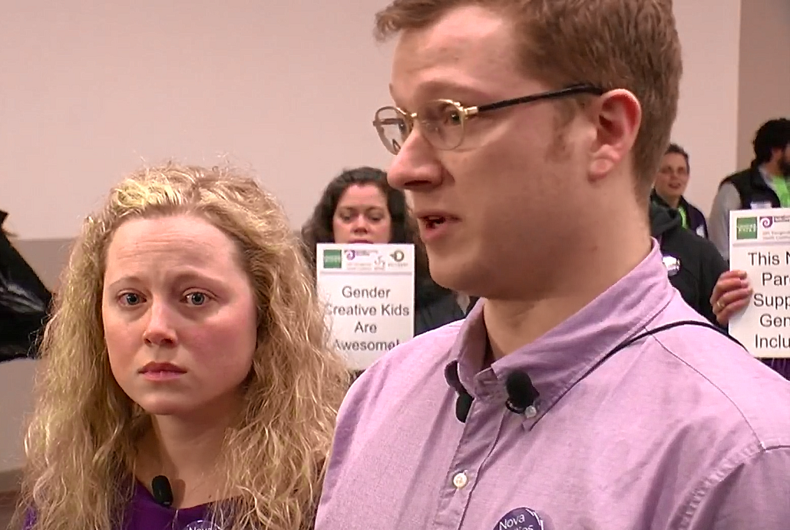 In 2015, David and Hannah Edwards enrolled their 5-year-old daughter, who is transgender, in Nova Classical Academy charter school in St. Paul, Minnesota. They talked with teachers and thought the school would be trans-supportive, but they say that school board members stood in the way of teachers who wanted to do the right thing.

Their daughter withdrew from the school and the parents sued. This week, they reached a settlement for $120,000 in damages and the school agreed to change some of its policies.

Nova is a publicly financed charter elementary school, and the Edwards enrolled their child there when they thought that she was a gender non-conforming boy. As the school year progressed, the daughter started living as a girl in all parts of her life except for at school.

According to the complaint, she received negative comments from other kids about her pink shoes and backpack, so the Edwards met with her teacher and suggested reading My Princess Boy to the class. My Princess Boy is a book for young children that helps explain gender non-conformity.

The teacher agreed but the school board said that a letter had to be sent out to all parents saying that there was a transgender student at the school and that that book would be read. Of course, this led to an enormous controversy.

The school board changed the plan from that book to a PowerPoint presentation and allowed parents to opt their kids out of it, and half of them did.

Another issue was the school’s gendered uniforms. While the school insisted that any child can wear any uniform, they referred to certain garments as part of the boys’ or girls’ uniforms. The daughter was told “mostly every day” that she should not be wearing a specific sweater by the kids in her class, and the school refused to clarify its uniform policy.

The school board decided to hold a series of meetings about gender-inclusive policies at the school, and the Edwards felt pressure to out themselves and their daughter in order to advocate for better policy. This led to backlash against them personally, and a petition was started by a group of parents entitled “I oppose the mixed sex use of bathrooms and locker rooms at Nova Classical Academy.” Conservative blogs published pictures of their daughter, and the parents were receiving letters and emails from people they had never met.

The situation was spiraling out of control, and the parents met with the principal one last time and came up with a plan that involved reading I Am Jazz, a picture book co-authored by Jazz Jennings, at school and letting teachers tell students not to misgender the daughter. The principal contacted them later saying that there was a change in plans because, once again, the school board was siding with transphobic parents.

So the daughter was pulled out of the school.

Hannah said that the most important part of the settlement was the policy changes. “We were able to get… Nova to clearly define their policies to prevent the school from discriminating against another child the way they discriminated against [our daughter].”

“Our experience shows – from start to finish – what can happen if a school caters more to the parent community than to a child’s human rights,” David said. “It’s easier and safer to have policies in place from the beginning than to adopt policies in the midst of an individual situation like Nova did, inviting publicity and controversy that led to harm to the community, to our family, and to their school.”