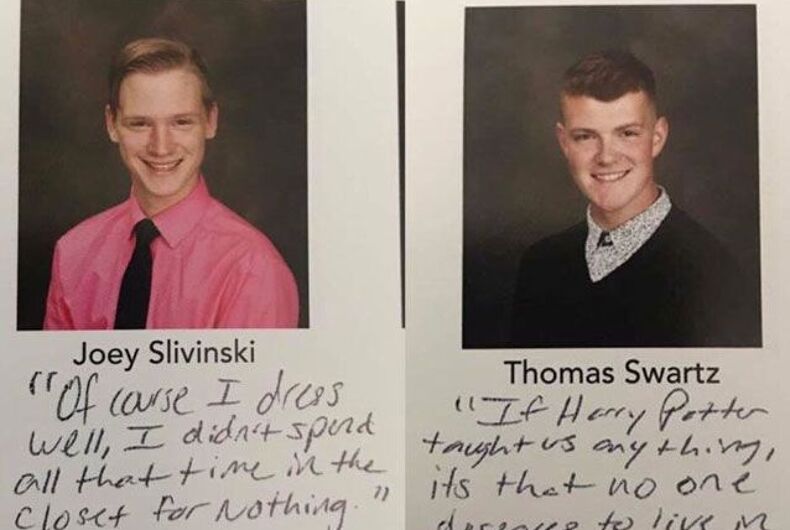 Two high school graduates were told that their yearbook quotes, in which they reference coming out, would not be included because they might “offend another student or groups of students.”

Joey Slavinsky and Thomas Swartz both graduated from Kearny High School, near Kansas City, Missouri, this year. Quotes from each graduating senior are included in the yearbook. Slavinsky’s was “Of course I dress well, I didn’t spend all that time in the closet for nothing.” Swartz’s was “If Harry Potter taught us anything, it’s that no one deserves to live in the closet.”

Both of them are gay and said that they found the quotes “inspirational.”

But the district decided not to include their quotes in the 2017 yearbook.

“I went to find my quote in the yearbook but nothing was there,” Slavinsky told KCTV 5.

“It was a blank picture under my name,” Swartz said.

In a statement, school administrators said, “In an effort to protect our students, quotes that could potentially offend another student or groups of students are not published.”

The district apparently believed that other LGBTQ students would be offended by the quotes, since the statement continues, “Doing so in this case had the unintentional consequence of offending the very students the practice was designed to protect. We sincerely apologize to those students.”

“They need to know what they did is wrong,” Swartz said. “I want to be able to tell other people my story about what happened.”

“I’m comfortable in my own skin and with who I am,” Slavinsky said. “It felt like the district took that from me.”

They are planning to make stickers with the quotes for their friends’ yearbooks.

Out singer Aaron Carter gets emotional at an LGBTQ venue

Chelsea Manning poses in a swimsuit for ‘Vogue’ interview