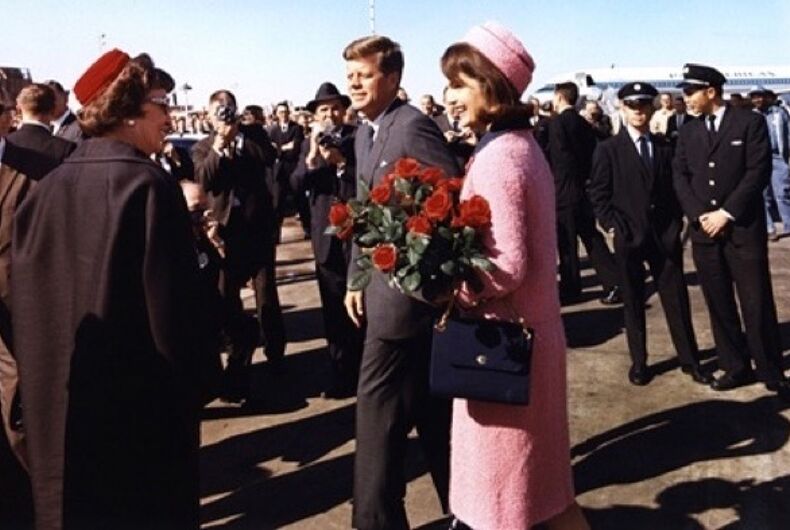 JFK and Jackie arrive in Dallas on that fateful day

In 1969, New Orleans District Attorney Jim Garrison prosecuted Clay Shaw for allegedly conspiring to kill President John F. Kennedy. Shaw, a gay man, was the only person ever put on trial in connection with JFK’s assassination.

Ferrie died of a brain aneurysm before going on trial.

Garrison later embraced a revised theory that Shaw, Oswald and Ferrie worked for the CIA. He theorized the agency masterminded JFK’s murder at the behest of the military because JFK was easing Cold War tensions and pulling out of Vietnam.

While Garrison’s theory about the CIA may be true, he failed to connect Shaw to JFK’s assassination. It took a New Orleans jury less than an hour to acquit Shaw. In 1976, the House Select Committee on Assassinations determined that Shaw did have ties to the CIA.

Paine and Marina met at a party in February 1963 and began a brief friendship. They lived together for about two months, up until November 22, 1963, when JFK was assassinated.

Ruth never charged Marina rent, noting the benefits she received from the friendship, including learning Russian, which Marina spoke proficiently.

In his 1967 bestseller The Death of a President, author William Manchester repeatedly insinuated that Ruth and Marina were in a lesbian relationship. Manchester quoted selectively from letters between the women, which were affectionate but could hardly be considered love letters.

In one letter, Marina wrote to Paine: “I kiss and hug you and the children.” “I love you Marina and want to live with you,” Paine said in a particularly effusive reply.

Manchester also claimed that Paine intended to take Marina to a Planned Parenthood clinic for advice on achieving sexual satisfaction apart from their husbands. But his book provided no documentation for this claim.

On the evening of Nov. 21, 1963, Oswald unexpectedly visited Paine and Marina at the Paine home, which is now a museum. During the visit, Marina repeatedly rebuffed his entreaties to “quit Ruth” and live with him, according to Manchester’s book. “Again and again he repeated that her preference for Ruth was unbearable for him,” wrote Manchester.

Inconsolable due to Marina’s rejection, Oswald went “mad” and shot JFK the next day from a sixth-floor window at his workplace, according to Manchester. Oswald himself was killed by Jack Ruby two days later, proclaiming his innocence to the end.

Manchester’s book was billed as the definitive account of JFK’s death, partly because it was commissioned by Jacqueline Kennedy, though she later dismissed it as “tasteless and distorted.”

His insinuations of a lesbian relationship between Marina and Paine remain firmly entrenched in the minds of many Americans. But extensive government investigations haven’t yielded a scintilla of supporting evidence, and both women have consistently denied being in a lesbian relationship.

For his part, Lee told police he was grateful for the assistance that Paine gave to his family. He described it as a “nice arrangement,” while he struggled to get on his feet financially. In a 1974 People Magazine interview, Marina said, “They called me lesbian, because I had a friendship with Ruth Paine, who isn’t that way at all. People are quick to apply names. I assure you I am normal.”
Marina has also repeatedly expressed her belief that Oswald didn’t kill JFK. In 1996 on The Oprah Winfrey Show, Marina said Oswald had “absolutely nothing” to do with JFK’s assassination.

Marina’s denials apparently didn’t hold any water with staunch anti-LGBT psychiatrist Charles Socarides. In 1978, he gave a lecture about homosexuality at Lankenau Medical Center in Wynnewood, Pa., during which he repeated Manchester’s canard that Marina’s lesbian relationship with Paine drove Oswald to kill JFK.

When informed of Socarides’ lecture, the late LGBT pioneer Barbara Gittings dismissed it as yet another attempt by Socarides to cast homosexuality in a negative light. Ironically, Gittings was friendly with Paine, and Gittings’ name appears in the exhibits released by the Warren Commission in 1964.

Ruth and Gittings sang in a madrigal choral group in Philadelphia before Paine and Michael relocated to Texas in 1959. Gittings described Paine as a very kind and generous person, who never gave any indication of being lesbian or bisexual.

After Oswald was killed, Gittings added, she felt sorry for the newly widowed Marina, and sent money to Paine. “I didn’t even realize Ruth knew Marina,” Gittings continued. “But I knew Ruth lived in the Dallas area. And she’s such a caring person, I figured she’d find a way to get the money to Marina.”

Today, Marina, 73, lives in suburban Dallas with Kenneth Porter, an electrician whom she married in 1965. Ruth, 82, divorced Michael in 1970, and she never remarried. She lives in a Quaker retirement village in California and has a male companion in her life.

While we may never know who killed JFK, speculation about an LGBT connection to his assassination should be put to rest, once and for all.

Is Peter Thiel’s billionaire bromance with Donald Trump about to end?