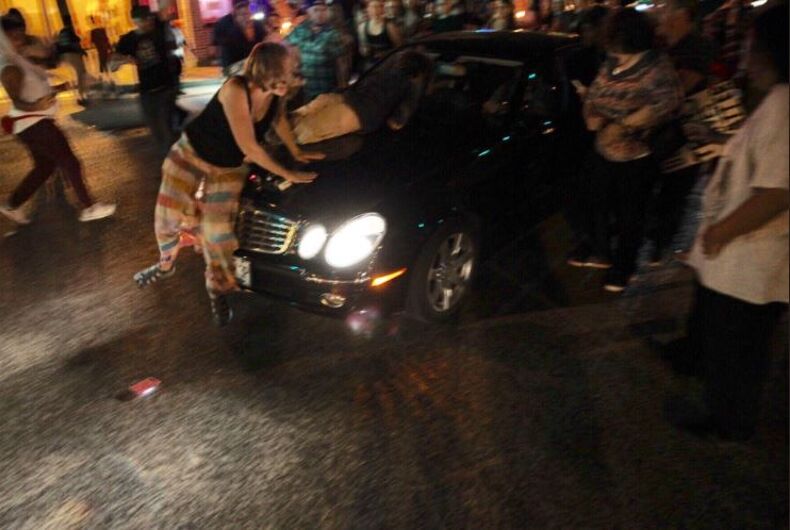 In a shocking instance of violence reminiscent of that which occurred in Charlottesville, in St. Louis, a car ploughed into a crowd gathered for a vigil Wednesday for a transgender woman shot and killed by police.

Mourners were remembering the life of Kiwi Herring, 30, killed by police earlier this week when she allegedly slashed an officer with a knife. They were responding to a call claiming Herring had stabbed a neighbor.

When demonstrators blocked access to the road, most drivers found side streets to go down, but a man in a Mercedes refused to give ground.

Instead, he drove into the crowd. St. Louis Post-Dispatch photographer David Carson captured the moment and posted it to Twitter.

Pix from car that drove through protesters, car stopped was surrounded, then drove through, one person ended up on hood, only minor injuries pic.twitter.com/EYNxSJARoF

Police and those present at the vigil are giving different accounts of how the situation escalated.

Tonight, a group of protesters marched from the Transgender Memorial to the intersection of Manchester and Sarah were they blocked traffic in all directions. A vehicle approached, stopped, honked its horn and attempted to drive around the protesters.

Police attempted to stop driver of vehicle who initially refused to stop. He stopped about a block away from the incident and was taken into custody for felony fleeing. The incident was captured on video. The investigation is ongoing.

Protester Keith Rose disputes that account in a Facebook post, saying no one hit the car until the driver began running into people. He said the driver gave the finger to the crowd before driving into them.

“The SLMPD is going out of its way to protect this man who tried to run over people just a couple weeks after the Charlottesville attack. This kind of immunity from consequences only emboldens the people who want to harm protesters,” he writes.

Six states have recently attempted to pass laws giving immunity to people who hit protesters who are blocking streets. Those efforts have grown increasingly doomed since the death of Heather Heyer in Charlottesville, who died after a car ran into her and other anti-racist demonstrators.

Video of the incident can be found below, at the 15 minute mark.

Before you get too worked up, keep this in mind about today’s trans military ban rumor