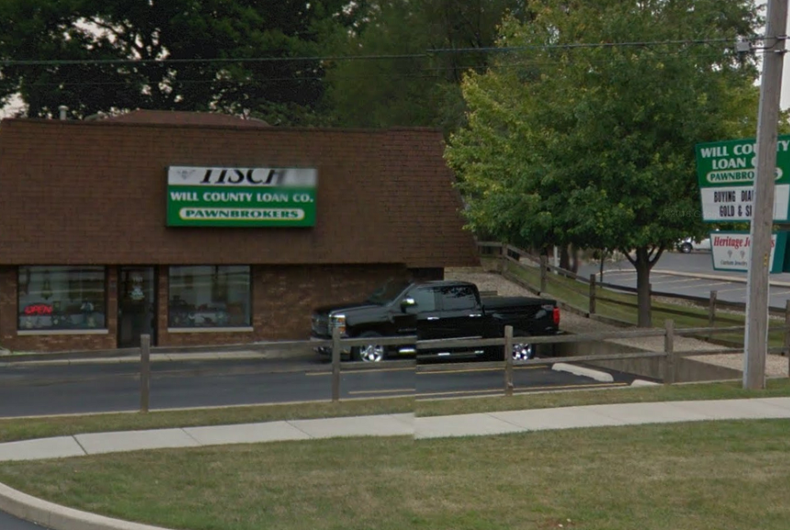 A pawnshop owner in Lockport, Illinois, says that he’s received so much backlash against a transphobic sign outside his business that he took it down.

Earlier this week, the sign outside Will County Loan Co. said, “HELP WANTED – MUST BE FEMALE FROM BIRTH.”

Owner Richard Tisch said that the sign was intended as “satire,” although he doesn’t seem to understand what that word means. “It was clear on the news that it was satire,” Tisch said on Thursday. He was referring to a Wednesday newspaper article in which he repeatedly said that the sign was “satirical,” as if that word were a talisman that should protect him from other people’s reactions.

Satire often has a political message, and Tisch’s message, as he explained to the Herald-News, is animosity toward transgender people.

“My tax dollars are paying for transgenders to have surgery in the United States military,” Tisch said. “My money is paying for an elective surgery that insurance companies don’t pay for. Why should our military pay for it? Our tax dollars pay for that. I’m offended by that.”

He said that doesn’t think the sign is offensive, but he took it down because of comments on social media. “The backlash from people has been driving me crazy for two days,” he said.

After taking down the sign, he continued to say that it was “satire.” “It’s quite clear, it was clear on the news that it was satire. It’s a joke, just like I’ve been doing for 25 years.”

Indeed, he has been making jokes like that for a while. In 2016, he came under fire for a sign that said, “OUTHOUSE IN THE REAR FOR TRANSGENDERS.”

Explaining that sign, Tisch said, “My issue is, nationwide, we should not have to accommodate… put a special bathroom in for some kid who gets up in the morning and doesn’t know if he’s a male or a female.”

The sign now says, “CASH 4 OLD MARBLES.” That might be satire, so take your old marbles to another pawnshop.