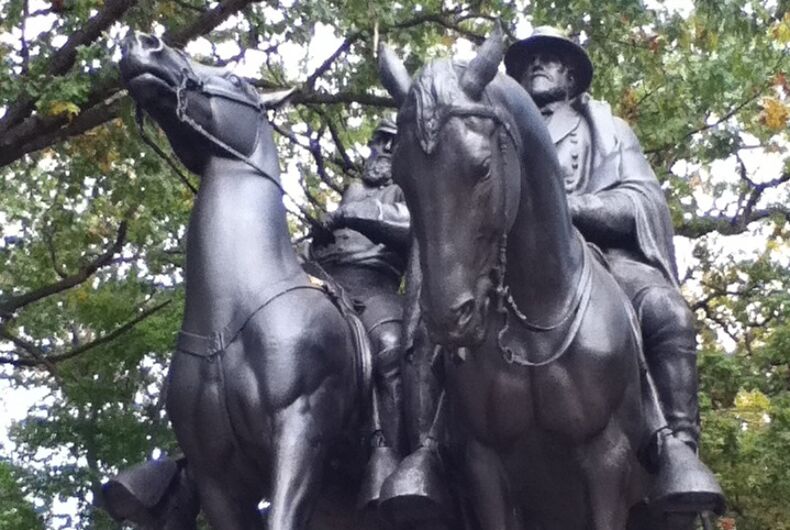 The landmarks removed are a monument to Confederate Soldiers and Sailors, the Confederate Women’s Monument, the Roger B. Taney Monument, and a Robert E. Lee and Stonewall Jackson Monument.

Taney was the Supreme Court justice who delivered the Dred Scott decision, where the court found that African-Americans were not citizens and therefore had no rights under the Constitution. Jackson and Lee were Confederate generals during the Civil War.

The Baltimore City Council voted to remove the statues earlier this week with a resolution sponsored by council member Brandon M. Scott. Scott referred to the white supremacist rally in Charlottesville, Virginia, before saying that these monuments honor “traitors.”

“The folks that are displayed in these monuments were traitors to the United States of America,” Scott said. “These monuments are being used as beacons of lightning for the vile racism that’s being spit out by alt-right and fringe groups throughout this country.”

The council unanimously voted in favor of removing the monuments, and they were removed at night. Journalist Baynard Woods posted video of the Taney and Women’s monuments being hauled away.

The move comes as some historians are highlighting Robert E. Lee’s personal opposition to Confederate monuments. “It’s often forgotten that Lee himself, after the Civil War, opposed monuments, specifically Confederate war monuments,” said Jonathan Horn, who wrote The Man Who Would Not Be Washington, a biography of Lee.

“Lee believed countries that erased visible signs of civil war recovered from conflicts quicker. He was worried that by keeping these symbols alive, it would keep the divisions alive.”

Many Confederate monuments in the United States were erected well after the Civil War ended. The Jackson and Lee monument that was just removed in Baltimore was unveiled in 1948.

Lee died in 1870, not too early to have written his opinion on such monuments. In 1866, he wrote, “As regards the erection of such a monument as is contemplated, my conviction is, that however grateful it would be to the feelings of the South, the attempt in the present condition of the Country, would have the effect of retarding, instead of accelerating its accomplishment; of continuing, if not adding to, the difficulties under which the Southern people labour.”

It’s impossible to know what Lee, a notably cruel slave-owner even in his time, would think about such monuments if he were alive in 2017.

Still, it’s worth noting that the person being honored in many of these statues explicitly said he wanted no such thing, which goes to show that these monuments have less to do with honoring long-dead traitors and more to do with advancing a political agenda today.