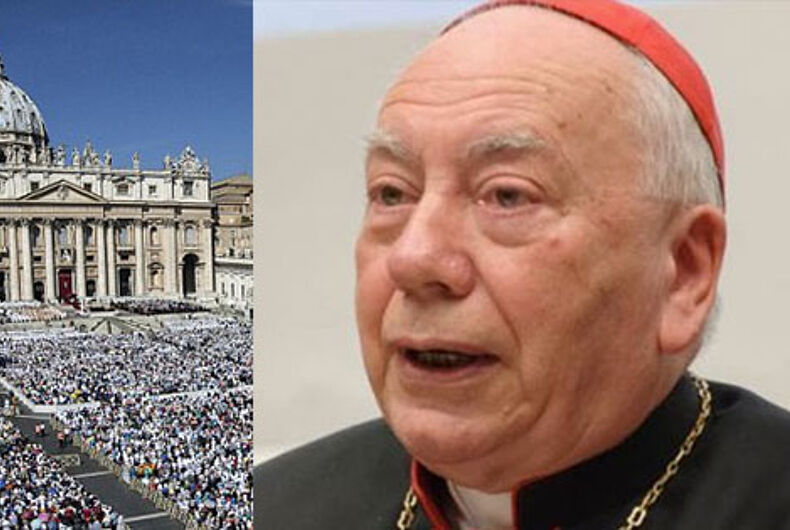 It happened last month, not far outside Vatican City, according to the Italian newspaper, Il Fatto Quotidiano. Police entered an apartment at the former palace of the Congregation for the Doctrine of the Faith — the office that strictly enforces Catholic dogma, once run by former Pope Benedict before he was elected pontiff.

The Rome apartment belongs to Cardinal Francesco Coccopalmerio, the head of the Pontifical Council for Legislative texts, but is not his home.

The unnamed monsignor who was arrested serves as the cardinal’s secretary; the paper said he was hospitalized for a short period in the Vatican’s Roman Pius XI clinic, to detox from drugs, and is currently staying at an undisclosed convent in Italy.

According to the report, the tip came from neighbors who were suspicious of what was described as the “irregular behavior” of men coming and going at odd hours.

Il Fatto Quotidiano reported that Pope Francis was furious at the news and as a result may force Coccopalmerio into retirement. The newspaper said the cardinal’s troubles were multiplied because the apartment was reserved only for high-ranking Vatican officials, not support staff, and the monsignor who was arrested had used a car with official Vatican diplomatic license plates to transport the drugs, thus avoiding inspection by Italian border police.

This is hardly the only recent scandal to rock the Vatican. The New Zealand Herald reports Cardinal George Pell, in charge of cleaning-up the Vatican’s shady finances, is on a leave of absence to defend himself against sex abuse charges in Australia.

NPR tweeted the Declaration of Independence & some Trump supporters lost it

What this congressman did when he visited Auschwitz is unbelievable