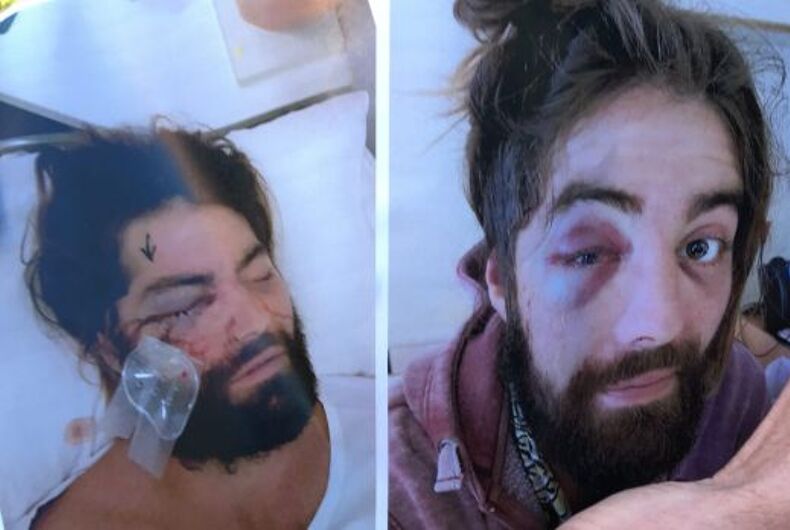 Two men have been arrested in connection with an attack that left the victim blind in one eye.

In late May, environmental scientist Elliott Harvey, 26, was going to the Rubix nightclub in Brunswick, a suburb of Melbourne, Australia. He was approached by three men before going in who said they didn’t like his haircut.

“I think they particularly disliked my hair cut, having my hair up in a fountain like this,” he told The Age, referring to his ponytail. “All the things they said to me were pretty trivial, just homophobic insults.” Harvey has not said whether he identifies as gay.

Harvey said he went into the club, but the assailants did not forget about their argument. They found him two hours later when he was separated from his friends and started attacking him, kicking and punching him in the face as he fell to the ground.

“It was cowardly really. I was on the ground when they punched my eye out,” he said. “I was just wondering where my eye had gone, I couldn’t see out of my right eye, that’s a pretty alien feeling.”

He has since had two operations on his eye, one to close a laceration and another to re-attach his retina. He has not regained his vision out of that eye.

“It’s drastically affected my life,” he said. “I can’t work because I can’t drive, but also depth perception has a lot to do with walking through undulating forests. I can’t really go surfing because of the glare. A lot of the things that make me happy are pretty sad right now.”

Detentions of gay and bi men have started again in Chechnya

YouTuber Dodie Clark comes out as bisexual… in song