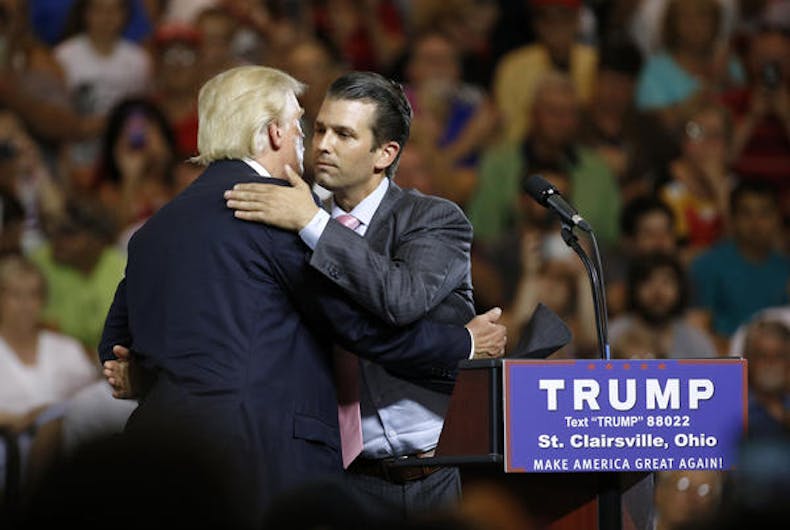 President Trump is standing beside his son, with a brief statement of support read by a spokesperson in a press conference without cameras. Feel the love. Photo: Patrick Semansky / Associated Press

Donald Trump, Jr. met with a Kremlin-connected Russian lawyer in hopes of getting damaging information on Hillary Clinton, as emails between the two show, and President Trump has finally broken his silence on the issue in a brief statement.

The statement was delivered by White House deputy press secretary Sarah Huckabee Sanders in a press briefing that was closed to cameras but from which there exists audio you can hear below.

“My son is a high-quality person and I applaud his transparency,” Trump said.

“Beyond that, I’m gonna have to refer everything on this matter to Don, Jr.’s counsel and outside counsel and won’t have anything else to add on that today,” Sanders continued.

The idea that Trump’s son, who is seen salivating over the possibility of successfully colluding with the Russians, tweeted out the email conversation he had with the lawyer due to his commitment to transparency is laughable. In fact, he only did so after he was told by The New York Times that it intended to publish them, which it has since done, and so he wanted to beat them to the punch.

Here's my statement and the full email chain pic.twitter.com/x050r5n5LQ

Here is page 4 (which did not post due to space constraints). pic.twitter.com/z1Xi4nr2gq

Well, Trump can sell that “he’s a good boy, he would never do wrong!” story all day, but plenty of people aren’t buying it.

Trump says he applauds his son's transparency. Donald, the only thing transparent about Jr. are his lies. Indeed, we see right through them.

I know these @DonaldJTrumpJr emails look bad, but they also sound bad and are bad!

Exclusive video of Donald Trump Jr being questioned about colluding with Russia pic.twitter.com/zjYwaRhHg7