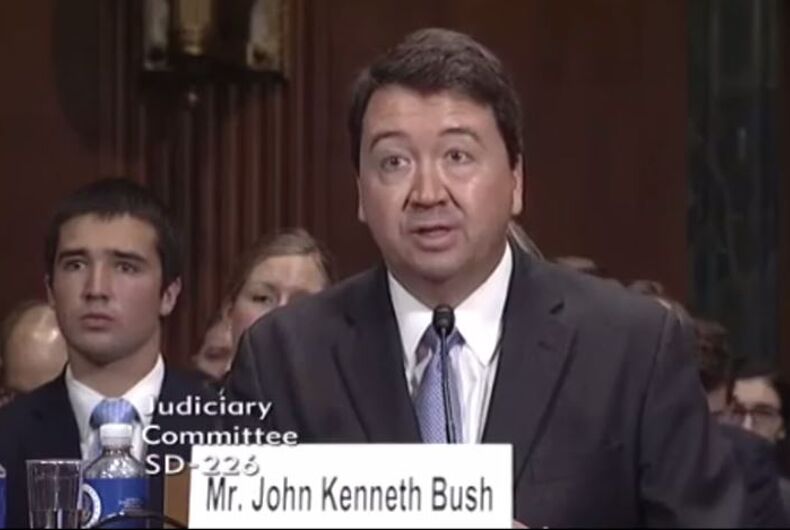 The Senate on Thursday confirmed a federal judge who once equated abortion with slavery, calling them the “two greatest tragedies in our country” in an anonymous blog post for his wife‘s blog, Elephants in the Bluegrass, and who pledged fealty to Donald Trump during the Republican National Convention.

The vote was 51-47 to elevate Kentucky lawyer and blogger John Bush to a lifetime post on the Cincinnati-based 6th U.S. Circuit Court of Appeals.

He also wrote a post critical of the State Department’s decision to change passport applications to refer to parents in a gender-neutral way, as “Mother or Parent 1” and “Father or Parent 2.”

Bush wrote that “it’s just like the government to decide it needs to decide something like which parent is number one or number two. When that happens, both parents are subservient to the nanny state — more precisely, a nanny Secretary of State.”

Democrats objected strongly to the nomination, arguing that Bush’s blog posts under a pseudonym disqualified him. Those included the post about abortion and slavery, links to articles on an alt-right conspiracy theory website, and the comment “Time to roll with Trump” while the GOP convention was underway last summer.

“They are awful, they are disgraceful,” said Sen. Al Franken of Minnesota, arguing that Bush was “uniquely unqualified for the job.”

But Bush was strongly supported by fellow Kentuckian Majority Leader Mitch McConnell, who lectured Franken on the Senate floor for saying that Bush was the worst nominee he’s seen in his time on the Judiciary Committee. McConnell was the beneficiary of millions of dollars raised for his re-election campaign by Mr. Bush’s wife.

McConnell called Bush “a man of integrity and considerable ability” and said that Franken needed to “think a little harder about his tenure on the Judiciary Committee.”

McConnell pointed out that the committee had considered and approved a judicial candidate nominated by former President Barack Obama who also had authored regrettable and offensive blog posts, and now sits on the bench.

“So I hope I have at least refreshed the memory of my friend from Minnesota and some of my other Democratic colleagues,” McConnell concluded angrily.

During his Judiciary Committee hearing earlier this year, Bush said he regretted some of his posts, including the one equating slavery and abortion. But he explained them as a “political activity” that would not carry over to his tenure on the bench.

“Donald Trump and Mitch McConnell should never have advanced this nominee who is clearly unfit to serve as a federal judge and we are disappointed that Senate Republicans voted to confirm him,” said David Stacy, the Human Rights Campaign’s Director of Government Affairs. “John Bush does not have the judgment or temperament to serve on U.S. Court of Appeals and has publicly demonstrated his contempt for LGBTQ people and their families.”

Bush will be taking the seat of a conservative judge, Danny Boggs, on a court already dominated by Republicans. The 6th Circuit covers Kentucky, Michigan, Ohio and Tennessee.