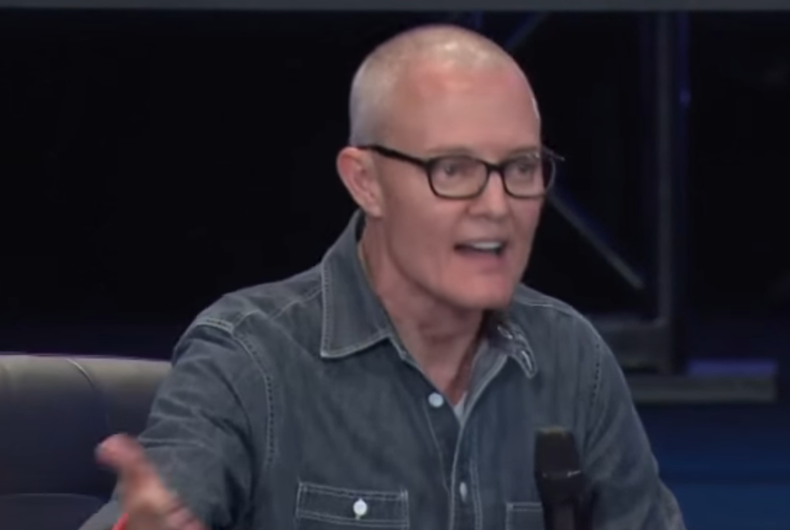 The student was forced to watch a video by noted ex-gay activist Sy Rogers.Photo: Screenshot/YouTube

The Milton Hershey School is a K-12 private boarding school where students live in buildings supervised by “house parents.” While the school is not associated with a particular branch of Christianity, its website says that education in “Judeo-Christian faith” is required, as well as weekly attendance at a chapel service.

Last year, former student Adam Dobson filed a suit in federal court against the school, alleging that he was forced to watch homophobic propaganda as a freshman in 2010. The school’s IT department saw that he had watched gay pornography and alerted his house parents.

The video was ex-gay activist Sy Rogers’s One of the Boys, which is not intended to be viewed by minors. For years, Rogers claimed that he* lived as a gay man, was involved in an LGBTQ-affirming church, and that he considered transitioning, which he usually presented as a sign of just how gay he was. He said that, through prayer and Bible study, he became straight and cisgender. He was associated with the now-defunct Exodus International, a non-profit dedicated to, among other things, promoting gay conversion therapy.

The student also alleges that the homophobic bullying by the house parents continued after the video. “We would pray together to have God help me from being gay,” Dobson said, alleging that his house parents told him about “terrible things that happened to other gay people.”

Two years later, Dobson attempted suicide while at the school, which resulted in his expulsion in 2013.

When the suit was filed last year, a spokesperson for the school called the claim “an outrageous allegation and a practice the administration would never allow or condone.”

Now that proof has emerged, the school released a statement on Friday that said, “Unequivocally, the school does not promote or endorse any program that could be remotely characterized as gay conversion therapy. Any suggestion otherwise is a gross mischaracterization of our values and the environment on our campus.”

The federal suit is claiming negligence and violations of the Americans with Disabilities Act.

*Rogers has dropped from the public eye since Exodus International ended. The Daily Beast reports that he has since transitioned, although it does not appear that they talked to him. Rogers’s own website uses male pronouns to refer to him, so I’m interpreting that as his preference.

Trans woman files complaint against the cop who misgendered her