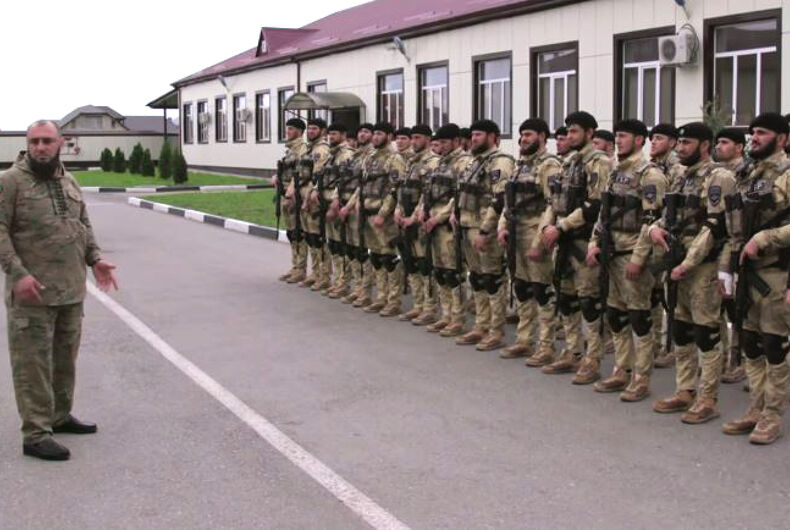 Ayub Kataev, prison warden and head of the ministry of internal affairs, and Chechen police stand guard at a site believed to have held gay and bisexual men. Photo: YouTube Screenshot/Vice News

The Russian newspaper that first broke the story of the detention, abuse, and killings of gay and bisexual men in Chechnya, a Russian subject, has published the names of 27 men believed to have been executed on January 26 in Grozny.

Novaya Gazeta said that it decided to publish the names of the deceased due to concerns that the investigation is not being carried out with sincerity, as police continue to deny the situation despite countless reports to the contrary. The hope is that releasing the names will further prod officials into action to stop the purge.

The Russian LGBT Network, which has been working to get gay and bisexual men in Chechnya out of the region, told International Business Times that not all of those on the list are gay.

“As far as we know, the information in the Novaya Gazeta regarding 27 people being killed is true,” a representative with the group said. “With regards to the sexual orientation of those killed, as far as we know there are homosexual people in this list, but not all of them at all.”

Novaya Gazeta has been reporting on abuses and killings in Chechnya for years, and started reporting on the abuses of gay and bisexual men in April.

Men are said to be abducted and beaten, often electrocuted, and mocked, as well as forced to hand over the names and numbers of other gay and bi men. Some have reportedly been returned to their families, who have been told they should murder their family member in a so-called “honor killing.”

Chechen officials continue to deny the detentions, abuses, and killings have taken place. While it appears the arrests may have ceased momentarily, they are now reportedly going forward with them once again.

The bodies of these men are said to have been buried in “hastily dug graves,” and the information has not only been published but also passed along to Russian officials in hopes of their searching for the graves and exhuming the bodies to determine if the reports are accurate.

The names of the men follows:

Vice News recently went Chechnya to look at the prisons where men say they were held captive and tortured. You can watch their report below.