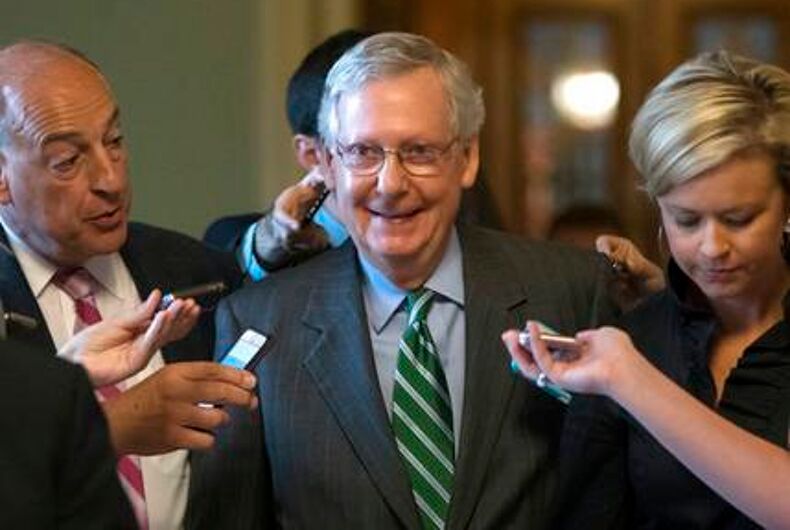 Senate Majority leader Mitch McConnell smiles as he leaves the chamber after announcing the release of the Republicans' healthcare bill which represents the party's long-awaited attempt to scuttle much of President Barack Obama's Affordable Care Act, at the Capitol in Washington, Thursday, June 22, 2017. The measure represents the Senate GOP's effort to achieve a top tier priority for President Donald Trump and virtually all Republican members of Congress. Photo: AP Photo/J. Scott Applewhite

The Republican leader says the Senate will delay the start of the August recess until the third week of the month.

In a statement Tuesday, Majority Leader Mitch McConnell said the delay is necessary to complete work on legislation and deal with Trump administration nominees. McConnell complained about the lack of cooperation from Democrats on the nominations.

The Senate had been scheduled to begin its five-week recess on July 31. The delay would push it to the week of Aug. 14.

McConnell said that once the Senate “completes its work on health care reform,” it would deal with the defense policy bill and nominations.

A long-time Senate Republican says he’s “very pessimistic” that GOP senators will settle their differences and push a health care bill through the chamber.

Iowa Sen. Charles Grassley made the comment Tuesday as party leaders were strategizing for a vote on their legislation next week. The bill will fail if three of the 52 GOP senators vote no, and far more than that have voiced opposition to their initial bill.

Grassley said Republicans have been pledging for years to repeal President Barack Obama’s 2010 health care law. He says there are consequences if lawmakers don’t deliver on campaign promises, and he says, “there ought to be.”

Over the weekend, Grassley tweeted that Republicans would lose their Senate majority if they don’t pass a health care overhaul.

A maverick Republican senator is warning party leaders against striking a compromise with Democrats should the GOP health care bill collapse.

Paul spoke Tuesday on the Fox News Channel as top Republicans hope to stage a climactic vote next week on their bill erasing much of President Barack Obama’s health care law.

Internal Republican differences have left the measure’s fate in question.

Senate Majority Mitch McConnell of Kentucky is suggesting changes aimed at winning enough GOP votes to prevail. The measure will lose if just three of the 52 GOP senators oppose it.

McConnell has said if the bill collapses, he’d focus on writing a more limited bill. It would likely require Democratic support.

Republican leaders want to stage a climactic vote on their health care bill next week. But internal rifts over issues like coverage requirements and Medicaid cuts leave the timing and even the measure’s fate unclear.

Some Republicans said Monday that a revised version of their bill erasing much of President Barack Obama’s health care law could be introduced Thursday. And No. 2 Senate GOP leader John Cornyn of Texas said the goal was for a vote next week.

Cornyn cited seven years of unresolved Republican debate over how to replace the 2010 statute. That underscored a sense among top Republicans that they had little to gain by letting their disputes drag on much further.

Consensus on a replacement seemed more remote than ever as senators returned from July 4 recess.

The ‘L Word’ reboot is officially happening at Showtime