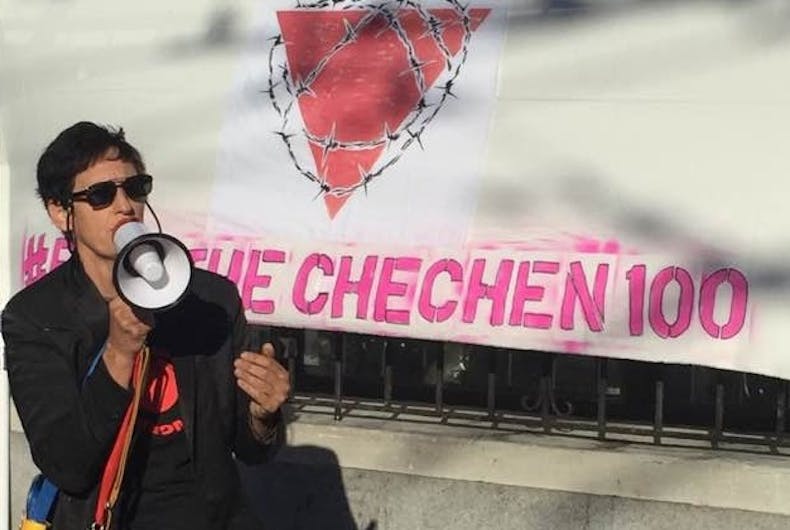 Anne-christine d’Adesky got arrested, accidentally, long before it happened on purpose during AIDS protests. The Pulitzer Prize-nominated journalist was covering civil disobedience at a nuclear facility in 1982 when she was approached by a suspicious policeman. Despite assuring him that she was covering the demonstration for Ms. Magazine, the officer arrested her anyway.

“I was very, very upset,” d’Adesky explains, “because I was on deadline and couldn’t file my story. I had to spend a week in jail.”

The arrest proved romantically serendipitous, however, when d’Adesky was placed in a cell with a woman with whom she had recently begun an affair. “We were locked up together and it was the most amazing time,” she says now. “I had hot jail sex. It was sexy and hilarious and challenging. That’s also when I learned to love grits, which we ate morning and night.”

And that story may very well sum up d’Adesky’s experience with activism: it can be tough, unjust, and sometimes perilous, but is comes with enormous benefits.

d’Adesky’s new book, The Pox Lover: An Activist’s Decade in New York and Paris, chronicles years of social activism while serving as a deeply personal diary. d’Adesky’s lush writing is immersive and entertaining, but it is her point of view as a lesbian in the gay male-dominated AIDS activism arena that is such a welcome (and underwritten) contribution to AIDS history.

The Pox Lover grew out of diaries d’Adesky wrote diligently throughout the 80’s and 90’s. “I chose to focus on my diaries from 1992-1999 because I was embarked on a specific journey,” d’Adesky explains. Exhausted from years of activism with ACT UP and The Lesbian Avengers, an organization she co-founded, d’Adesky took a break in Paris to reflect on her life while becoming entranced with long walks along the Seine River.

The book is often dreamlike, with memories washing over d’Adesky in nonlinear fashion, but it does not skimp on the realities of being a woman, much less a lesbian, in a largely male movement.

“In my own circle in New York City, lesbians were very involved in AIDS activism and ACT UP,” d’Adesky says. “That was also true wherever I traveled.” Just don’t try to relegate their involvement to the friendly lesbian nurse stationed in the intensive care unit. “We were not simply caretakers. That’s a complete erasure of our contributions. We were equal with the gay men who were moderating the conversation.”

In fact, lesbians brought thoughtful layers to activism that might have otherwise been overlooked. “Lesbians and feminists brought real strategy to the table,” d’Adesky insists, born of their experience with the peace movement and reproductive health. “We addressed institutional sexism when women could not get into clinical trials for AIDS medications because the FDA was afraid they might become pregnant.”

Speaking up sometimes meant putting the women in ACT UP at odds with the gay men at the table. “Gay men were narrowly focused,” d’Adesky contends, “and there were tensions, between privileged white gay men and people of color, or women, or people living in poverty. If you get a treatment that has only been tested on gay white men in a certain income bracket, it may not work. Especially globally. The work of women and the people of color caucuses was absolutely prescient and critical, even life-saving. But it was very much a battle because of institutional sexism and the invisibility of women in national health agendas. Feminists changed that, and that includes a lot of men who were very effective feminists.”

D’Adesky walked a fine line between being a journalist – she was writing about AIDS activism for The Nation, Village Voice, OUT Magazine and others – and responding to the urge to put down her notepad and join the protest events, which she often did. She would decide what role she would play, journalist or activist, on any given day (she now refers to her work as “advocacy journalism.”)

“I thought if I joined an ACT UP committee, I would compromise my journalistic ethics,” she says, “so I didn’t. I wasn’t neutral about it, though, because it was impacting my close friends.” So, d’Adesky focused on writing stories about what she witnessed that would reach the largest national audience possible.

During one of ACT UP’s most infamous actions in 1989, known as “Stop the Church,” hundreds of AIDS protesters gathered for mass at St. Patrick’s Cathedral in New York City. D’Adesky went inside, telling herself she would simply be reporting the incident. She became so inspired and emboldened by her fellow activists, however, that she joined them in loud chants that effectively shut down the mass.

“I just couldn’t do it,” she remembers. “I couldn’t sit it out.” As she was taken from the church in handcuffs, she checked with other reporters to be sure they were writing about it.

Nothing in decades of activism has dispirited d’Adesky. “People have this idea of activism as negative and thankless,” she says, while nothing could be farther from the truth. “You meet incredible people who want to change the world. I have had so much fun.”

With the resistance against the Trump administration, d’Adesky is seeing a lot of former ACT UP cohorts joining the fray again. “Even with Trump, I feel exhilarated,” she says. “It does manage to mitigate the suffering and fear.”

Anne-christine d’Adesky is a woman with very few regrets. “For anyone in the movement,” she says with assurance, “it is an incredibly exciting life.”

Anne-christine d’Adesky will appear at Red Emma’s in Baltimore on Tuesday, July 25th at 7:30pm for a special event, “The Personal is Political: In Conversation with Mark S. King,” in which the two of us will discuss activism during the AIDS years and in the age of Trump, and invite attendees to share their own experiences. d’Adesky has deliberately fashioned her book tour to learn from, and educate, LGBT people in every city on the schedule.

(This interview was also published at My Fabulous Disease.)

Why is Donald Trump trying to destroy public education?