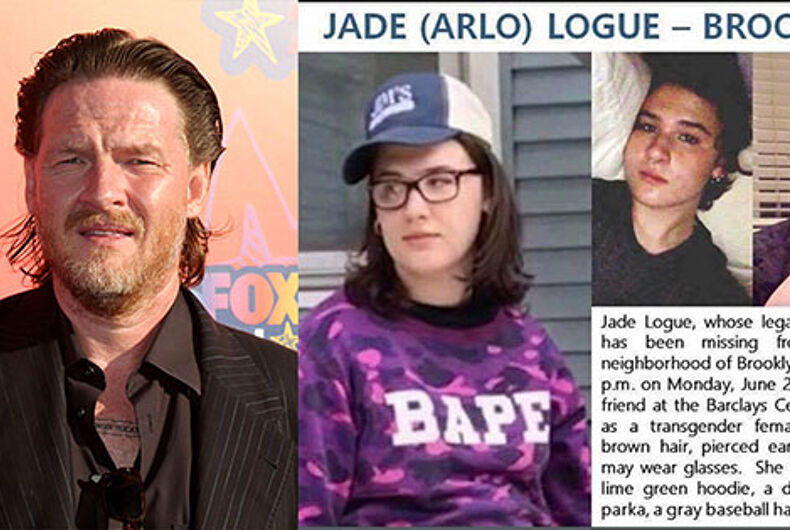 In a post to Facebook, Logue — who plays Harvey Bullock on the Fox drama series — addressed both Jade and whoever may know her whereabouts.

“I love her and who she is and her tribe is strong (I’ve met many wonderful people through Jade),” he wrote. “But there are some predators who swim among their ranks knowing they’re dealing with sweet, trusting souls. We want you home Jade.”

“Whoever knows where she is, whoever may be with her — clearly this thing has become big and crazy,” Logue wrote. “The point is, you may have had good intentions to help her, but I’m sure you realize that this situation is bigger than you could’ve anticipated. It’s okay. Just drop her off.”

Because the teen has not yet changed her legal name, the detective from the Deputy Commissioner for Public Information misgendered her in describing her as a male, using her birth name, even after being informed she identifies as female. It’s not clear if the detectives assigned to her search recognize the difference, but DCPI did acknowledge that this is an issue, and Logue himself tweeted about the misgendering.

not her choice- the NYPD, others have mistakenly (and with no malice) misgendered Jade- so the news reports vary – it's understandable

Hollywood stars and members of the LGBTQ community have turned to social media to spread the word.

message from @officialDannyT about Jade's disappearance. Whoever has her, please release her- no questions asked. pic.twitter.com/OhUCSr7Jqr

Jade is 6’1″ and was last seen wearing a green sweatshirt, according to the NYPD.

“According to our complaint, the teen went to meet a friend and did not return home,” said the police spokesperson.

Anyone who might information is encouraged to contact Crime Stoppers at 800-577-TIPS or call the detective assigned to the case, whose name and number Logue tweeted.

If you have any information regarding Jade's disappearance, please contact Detective Frank Liuzzi at 718 636 6547

Why didn’t Trump issue a pride proclamation & what does it teach us?