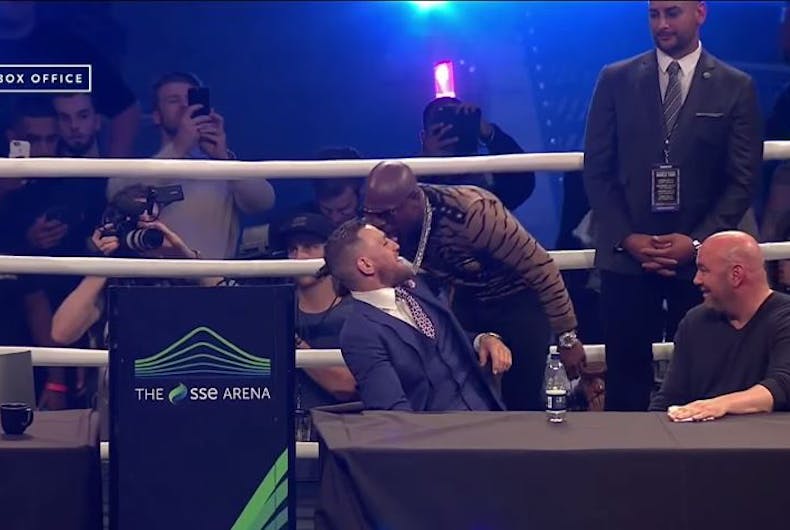 Floyd Mayweather went after Conor McGregor with a homophobic slur on Friday in London during a press conference ahead of their boxing match on August 26.Photo: YouTube Screenshot

Floyd Mayweather, who once condemned Manny Pacquiao’s homophobic comments and said he supported marriage equality, called Conor McGregor a “faggot” on Friday in London during a press conference ahead of their fight on August 26.

McGregor and Mayweather have been on a world tour promoting the fight, and both fighters have been coming fast and hard with the verbal blows. Thursday was no less vicious than stops in Los Angeles, Toronto, and Brooklyn.

“Yeah, we gonna talk about this pussy,” Mayweather said. “You punk, you faggot, you hoe.”

McGregor flipped him off and told him to sit down.

“The reason Floyd called Conor the F word is because Conor called Floyd a monkey,” Mayweather’s representative told TMZ Sports. “Floyd has nothing against gays or lesbians at all…Floyd has them on his staff. Floyd has nothing but the utmost respect for gays and lesbians.”

The “monkey” comment is said to have happened off mic.

Hudson Taylor, executive director of Athlete Ally, condemned the use of the word, as well as the official response from Mayweather’s camp, which he called “equally troubling.”

“If Mayweather truly has the utmost respect for the LGBT community, he wouldn’t resort to using slurs that perpetuate anti-LGBT stigma and hate,” Taylor said.

“I feel that we should let people live their lives the way they want to live their lives,” Mayweather said last year, after asked about Pacquiao’s remarks. “I don’t have nothing against anyone.”

McGregor has gotten some flack for his own choice of words, telling Mayweather to dance for him and calling him “boy.”

In response to claims that he was racist, McGregor said he couldn’t be racist, as he is “half-black from the bellybutton down.” Those comments didn’t exactly squash the racism claims.

Mayweather is among those who have criticized McGregor for his comments.

“When I was young, I may have said some things that I shouldn’t have said, when I was young. But we live, we learn, and you don’t say those things after a certain age, because it’s all about growth and maturity,” Mayweather said.

Looks like there’s some growth and maturity work left to do for Mayweather as well.

Editor’s note: This article has been updated to include statements from Mayweather’s representative and Hudson Taylor of Athlete Ally.