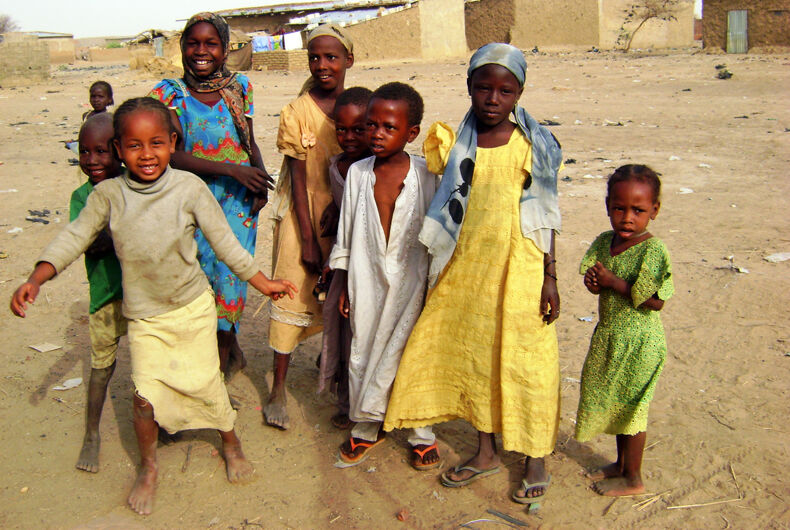 MAMPONG, GHANA - APRIL 19: Unidentified Ghana children pupils on April 19, 2009 in Mampong, Ghana. Close to 10% of Ghana's population are orphans due to HIV/AIDS.Photo: Shutterstock

When President Donald Trump left his chair at this month’s G20 summit while Africa was discussed and had daughter Ivanka sit in for him, critics blasted it as a breach of diplomatic protocol. But it also drew attention to the growing concern that when it comes to the continent of 1.2 billion people, the U.S. leader has been notably absent.

Six months into office, the Trump administration’s policy toward Africa has been left to drift, observers say. They cite vacant diplomatic posts and a lack of strategic thinking on multiple issues, including extremist threats in East and West Africa and civil war in South Sudan.

It’s always been a struggle to get Washington’s attention on Africa, but “with this administration, I don’t get the sense that it’s even on the map. We’re looking at blank page here,” said Richard Downie, acting director of the Africa program at the Center for Strategic and International Studies in Washington.

In addition, there is still no permanent Africa director at the National Security Council. It is the only region without one.

This month the Trump administration delayed a decision on whether to lift sanctions on Sudan, prompting Sudan’s president to order that all negotiations with the U.S. be frozen until mid-October.

Other White House moves suggest that Trump’s “America First” foreign policy is increasing focus on security and counter-terrorism efforts in Africa over the humanitarian and development agenda supported by previous administrations.

Several African nations face threats from extremist groups like Boko Haram and the al-Qaida-linked al-Shabab. At the same time, millions of people are at risk of starvation in Somalia, South Sudan and northeastern Nigeria, and potentially violent elections are approaching in regional powers Kenya and Congo.

While the U.S. this month pledged nearly $640 million in humanitarian assistance to alleviate hunger in South Sudan, Nigeria, Somalia and Yemen, critics said the aid had been approved months earlier by Congress but delayed by the Trump administration.

Trump moved relatively quickly on security. In March, he approved a Pentagon proposal to “conduct lethal action” in Somalia against al-Shabab. Less than a month later, Defense Secretary James Mattis visited Camp Lemonnier in Djibouti, the only permanent U.S. military base in Africa.

Tillerson has yet to visit Africa, according to the State Department’s online log of his travels.

The White House’s 2018 proposed budget reflects the shift toward security and away from aid. It includes a $52 billion increase on defense spending, made possible by proposed cuts to the State Department and the United States Agency for International Development by roughly a third.

The proposed budget would reduce funding from $30 million to $8 million to carry out the closure of the United States African Development Foundation, which supports local enterprises in 30 countries. It also would reduce funding by about $1 billion to the U.S. President’s Emergency Plan for AIDS Relief, or PEPFAR, which supports anti-retroviral therapy for over 11 million people, many in sub-Saharan Africa.

The Trump administration also wants downsizing of United Nations peacekeeping missions, many operating in Africa’s most volatile areas. In June, the U.N. reduced its annual peacekeeping budget by more than half a billion dollars.

Current and former U.S. military leaders have warned that deep cuts to diplomacy and aid could jeopardize long-term U.S. interests overseas, and some lawmakers have pledged not to pass the budget as it stands.

“This budget, if fully implemented, would require us to retreat from the world diplomatically or put people at risk,” Sen. Lindsey Graham told reporters in May. “You’d have lot of Benghazis in the making if this thing became law.”

In Somalia, development programs meant to counter the lure of extremism could disappear under the proposed budget. USADF grants have reached nearly 6,000 direct beneficiaries there since 2012, said Abdinasir Ahmed Osman, project coordinator for the Somali Consultants Association, which monitors the work.

In the capital, Mogadishu, USADF-funded programs target youth between 18 and 35 – the same demographic that extremist recruiters go after, Osman said.

He said several development and trade initiatives such as Power Africa and the African Growth and Opportunity Act continue and diplomats are going about their work. But South Africa, one of the continent’s top economies, remains without a U.S. ambassador.

“It’s pretty routine at this period, given the other challenges in the world,” Neubert said.

Others disagree, saying that without a president visibly engaged in Africa — especially after President Barack Obama, whose father was Kenyan — U.S. diplomatic efforts could flounder.

“What you have is a policy vacuum when it comes to basic, critical issues in Africa,” said Steven Feldstein, a former deputy assistant secretary of state in the Obama administration.

“Diplomacy will follow where the president signals his interest.”

Are Megyn Kelly’s ratings tanking because all liberal men are gay?