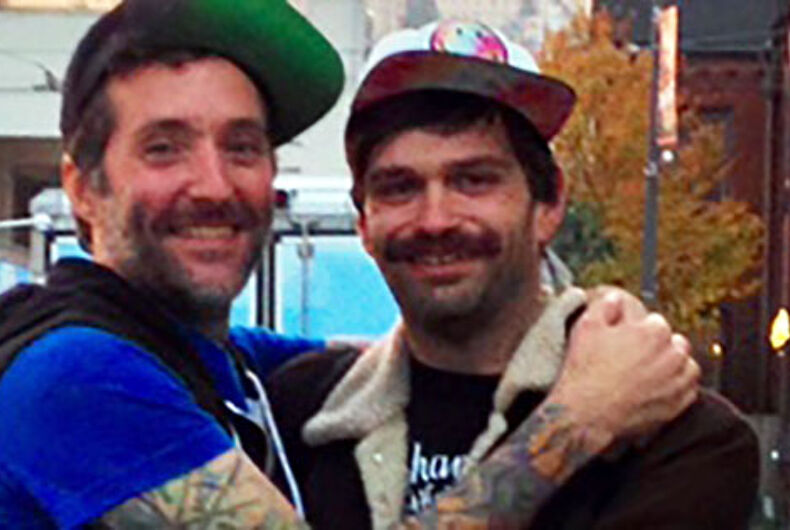 A gay couple living at an extended stay hotel near Disneyland are outraged at hotel managers and the local police department following an incident Sunday that they maintain was a disturbing episode of antigay violence, homophobic treatment by officers and indifferent response by the staff at Candlewood Suites in Anaheim, California.

Will McAdam — who also goes by the name “Elijah” — spoke to LGBTQ Nation exclusively about his frightening encounter with another guest, whom he described as a blonde, 6’7″ tall, large white man in his mid-20s. McAdam said the man assaulted him, held him against his will, spat on him and taunted and threatened him with vulgar and homophobic slurs. He said his partner, August Skyheart, is a cancer patient and was also spat upon by this man. Skyheart declined to be interviewed but was present during McAdam’s call to us.

The official report from Anaheim police is starkly different from the couple’s account, and leaves many unanswered questions, including: why did police officers mute and switch off their body cameras during their investigation? What really happened during those moments?

How This All Started

It was midday and the unidentified guest had just checked-in to the hotel, located very close to the “Happiest Place on Earth.” He was staying with a middle-aged man and woman and their two daughters, one of whom McAdam believes was the tall man’s girlfriend. “They appeared to be Hispanic,” McAdam said.

McAdam, who is president of PrivacyDuck, an online security company, said he was on a call in their room, when he heard a commotion in the hallway of the hotel.

“I opened the door and it was a family of five individuals. A woman looked at me and said, ‘What’s your fucking problem?’ And I said, ‘Sorry, I’m on the phone making business calls. Is everything okay? Quiet the fuck down, you’re in public.'”

McAdam went back into his room and the door slammed shut behind him. That — and what he said in the hall — apparently did not sit well with the tall man.

“I went back toward the phone to call the front office [of the hotel], to make it known what just happened. Right then, I heard three, successive, hard kicks against my door. I hear someone yell, ‘Fucker, open up!'”

With Skyheart just steps away, he immediately opened the door, saying to the man, “What the fuck?” Anaheim police later told McAdam this was his second mistake, the first being going into the hall when he heard the commotion from inside his room. He doesn’t agree.

“Honestly, no,” he said, “because I’m a big believer in defending my property, my partner and my home.” The couple have been living in that room since October and, surprisingly, have not yet moved out, as they are working on a longterm online security project for a major corporation in Orange County.

“He was trying to break in,” McAdam said. “He then spit across my shoulder into my partner’s face. Just three weeks ago he completed chemo and radiation for stage 3 cancer. And so we’re pretty big fans of not having people spit in my partner’s face.”

It’s at this point the confrontation escalated into physical violence — which McAdam admits, he started. In response to the spitting, McAdam said he lunged at the man with his entire body and they wound up back in the hotel hallway. He’s lanky and 6’2″ tall — a good five inches shorter and much smaller in size than the other guest, who McAdam described as close to 375 pounds.

“‘What are going to do, you little faggot queer?'” McAdam quoted the man as saying to him, as the stranger clenched his shirt in his fist, pinned him to the wall and held him against his will, so close he could smell McAdam’s breath. “‘This faggot’s been drinking,'” he said to members of the family, standing nearby.

McAdam admitted he drank two glasses of wine over the course of two hours inside his room prior to the confrontation, but said he was not drunk or even buzzed.

The two young women in the man’s party then started yelling slurs at McAdam, including “fag” and “queer,” he said, as he remained pinned and said he contemplated whether he should kick out his attacker’s knee, or gouge his eyes, to break free. That’s when Skyheart, also 6’2″ tall, confronted the man and told him to let his partner go.

It’s at this point that the blonde man, according to McAdam, said “‘Let’s just walk away. Let’s get him kicked out.'”

After letting him go, he said the man spat at him a second time and started to walk away. But McAdam said he then turned around and threatened the couple: “I know where you live. I’ll come back for you later tonight. You guys are fucking dead.”

It’s at this point, according to McAdam’s account, that Jose, a maintenance man who works at the hotel came upon the scene and approached McAdam and Skyheart, asking if they were alright. McAdam said he hadn’t seen anything. However, Anaheim police say Jose told them a completely different story.