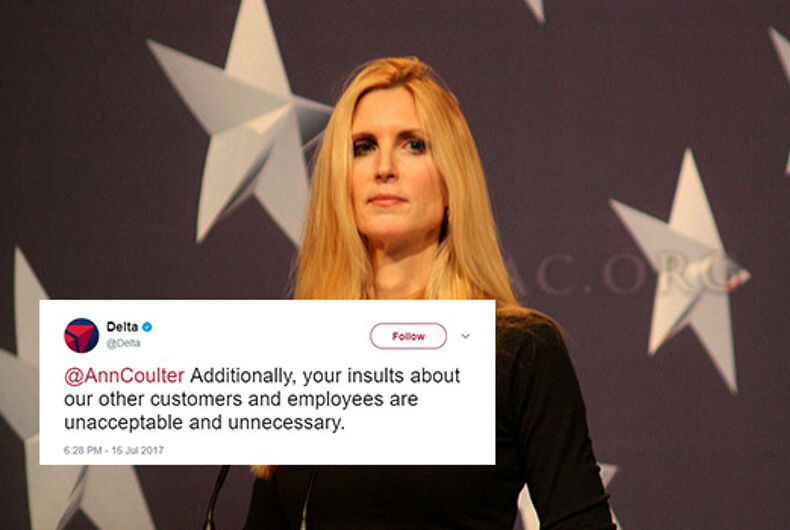 When Ann Coulter spent, according to her, $10,000 of her time deep-dive researching the seat she wanted on her Delta flight, she never expected she might face the horrors of a minor inconvenience.

Coulter specifically booked a seat with extra legroom, she said, and she didn’t take too kindly to being moved.

So she took to Twitter, every entitled whiner’s favorite weapon of choice, to not only bitch and moan about the whole situation but to also put staff and the woman moved to her former seat on blast by taking and posting their pictures.

Coulter was so bothered, she tweeted about Delta throughout the weekend. Here are but a sampling of those angry mini-missives:

Just when you think it's safe to fly them again, the worst airline in America is STILL: @Delta

Does your union hate you, @Delta? Not really worth spending all that money on planes when @Delta gate staff give your seat away.

"Why are you taking me out of the extra room seat I specifically booked, @Delta?' Flight attendant: "I don't know.” pic.twitter.com/a0M1faZXMu

Hey @Delta, if it was so important for the dachshund-legged woman to take my seat, she should have BOOKED THE SEAT IN ADVANCE. Like I did.

Just look at those, “Can you believe we have to put up with this woman’s shit?” faces.

If you thought it was about $30, @Delta, why didn't you give this woman $30 and let me stay in my PRE-BOOKED, ASSIGNED seat? pic.twitter.com/sR1g8tuRWX

Delta tried being reasonable with the enraged Coulter, although it probably didn’t calm the diva down any when they called her by the wrong name in their initial, now deleted, tweet.

Eventually they got her name right, and threw $30 her way, but then told her not to mistake that monetary offering as a sign that she was not still firmly in the wrong.

@AnnCoulter We're sorry you did not receive the preferred seat you paid for and will refund your $30. (cont.)

@AnnCoulter Additionally, your insults about our other customers and employees are unacceptable and unnecessary.

I much rather would have seen Anna Coulter getting dragged off the plane kicking and screaming. Anne, next time fly United ok?

Anne, a suggestion: Next time save yourself the $10,000 of wasted time, and save everyone your histrionic wrath, and just book a first class seat.

You’ll apparently save money on the deal, so it seems the easy choice.

That is, if you can stand giving up the chance to opportunity to play the victim.