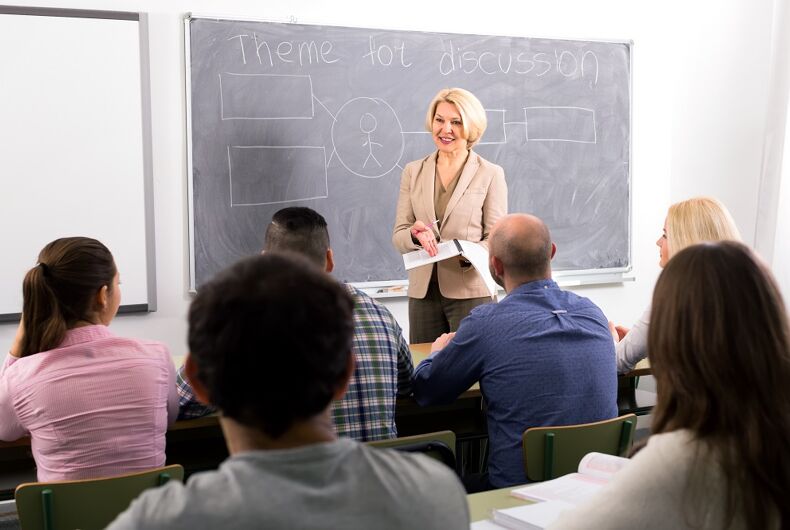 A woman in Wisconsin sued her professor because, she says, the assigned readings were too sexual for her.

Donna Kikkert, 59, is working on her bachelor’s degree at the University of Wisconsin-Stevens Point. She took Advanced Creative Writing – Poetry with Professor Patricia Dyjak, where she earned an F.

Kikkert says, though, that that F was just retaliation for her complaints about the course’s content.

According to court records, Kikkert said that readings focused on “lesbians, illicit sexual relationships, incest and frequent swearing” instead of classic works from Robert Frost and Edgar Allen Poe.

I hope someone tells her what Frost’s “Putting in the Seed” is about.

“[Dyjak] has swung the pendulum far to the side of LGBT students and, in doing so, has chosen to totally discount the importance and the validity of the mainstream student population,” Kikkert claimed. She also accused the professor of showing her breasts in class and of retaliating against her complaints with a bad grade.

In her claim, she acknowledged the importance of being challenged in college, but… really, no, she doesn’t actually believe that. “I think professors need to incorporate having a sensitivity to what students would consider as wanting to learn,” Kikkert wrote, also showing why she might not have gotten a good grade in a writing class.

Kikkert asked the court to force Dyjak to give her an A and to either fire or suspend the professor for a year.

Dyjak’s lawyer – a state assistant attorney general, since Dyjak is a state employee – filed a motion to dismiss because, it turns out, courts can’t force professors to give certain grades. The judge dismissed Kikkert’s claims.

Dyjak has not commented on the case.

Forget about impeaching Trump, Mike Pence would be worse