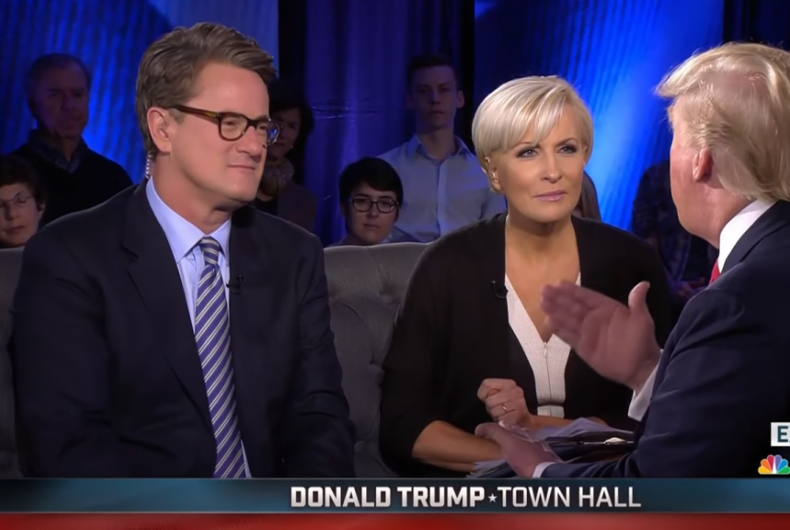 Can anyone stop President Donald Trump from tweeting in the same immature and thin-skinned manner while in office as he did as a “private” citizen?

So far, despite his team’s best efforts, the answer is clearly no.

Today, Trump displayed yet again how low he is willing to sink in an attack on Morning Joe hosts Mika Brzezinski and Joe Scarborough.

Little of what Trump said in the tweets is actually true.

Morning Joe has been increasingly critical of Trump, but its ratings are not suffering. This line of attack follows a trend. Trump regularly claims that media sources are failing, such as The New York Times and The Washington Post, when in fact they are experiencing a boom, not a bust.

Ironically, this is in no small part due to interest in coverage of the Trump administration, as well as a backlash against his attacks on the media.

Photos also show that Brzezinski showed no signs of bleeding or being bandaged due to a face-lift, or for any other reason.

The attack on a woman’s looks is also par for the course for our president, who took no such swipe at Scarborough.

At least three Republican senators have taken to Twitter to call on Trump to stand down, The Hill notes, joining a chorus of Democrats condemning it as well. They are Sen. Lindsey Graham of South Carolina, Sen. Ben Sasse of Nebraska, and Sen. Susan Collins of Maine.

Mr. President, your tweet was beneath the office and represents what is wrong with American politics, not the greatness of America.

Please just stop. This isn't normal and it's beneath the dignity of your office.

This has to stop – we all have a job – 3 branches of gov’t and media. We don’t have to get along, but we must show respect and civility.

House Speaker Paul Ryan said that he does not see the tweet as appropriate.

Republican Rep. Tom Reed told CNN that he was “concerned with that type of language,” and suggested that maybe the intent was to “distract from the health care debate.”

“I don’t think that the President’s ever been someone who gets attacked and doesn’t push back,” deputy White House press secretary Sarah Huckabee Sanders said on Fox News. “There have been an outrageous number of personal attacks not just to him but people around him.”

“This is a President who fights fire with fire and certainly will not be bullied,” she added.

Perhaps we can count on First Lady Melania Trump to step in? After all, she had talked about starting an anti-cyberbullying campaign.

No, just kidding, turns out she’s fine with it too, boasting through a spokesperson that her husband will always hit back 10 times harder whenever he’s attacked.

“It’s a sad day for America when the president spends his time bullying, lying and spewing petty personal attacks instead of doing his job,” MSNBC responded in a statement.

Brzezinski has responded with a tweet of her own.

TMZ tried to get Kellyanne Conway to speak on the tweet, to no avail. She dodged the question, bringing up other policy goals, and the joy of “bipartisan hugs” and how beautiful of a day it was in Washington.

Utah man pleads guilty to burning his husband to death