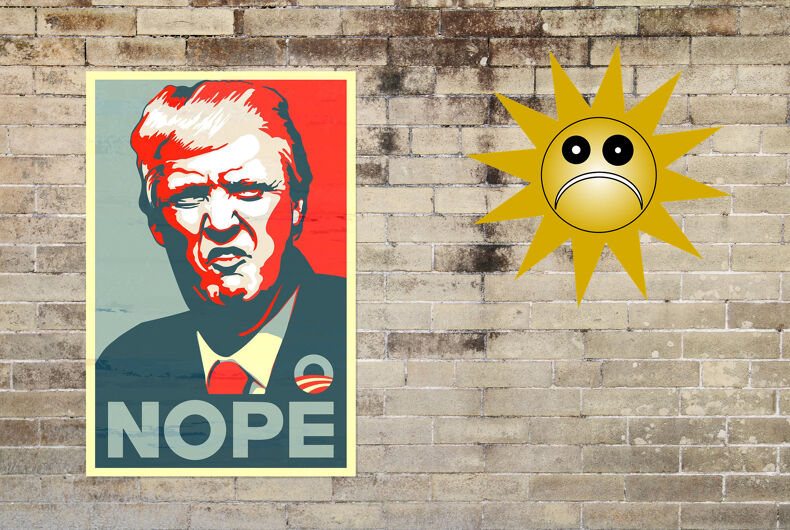 Trump seems to have realized Mexico won't be paying for the wall, so he has hatched a new plan.Photo: Pixabay

It seems like only yesterday that Mexico was going to pay for the wall, but time changes all men, even our president.

Even Trump doesn’t really buy that story anymore. I know, sad, but don’t fret, a new plan has emerged from his great mind.

Our dear leader has looked skyward and happened upon a brilliant idea, despite pulling out of the Paris Agreement, appointing climate change denying Scott Pruitt as head of the EPA, and wondering aloud on the campaign trail how ozone depletion could be a real thing (think of all the CFCs he unleashed upon his make-believe full head of hair back when hairspray was great), President Trump has found Jesus on the merits of solar power.

The sun will pay for the wall. You’re off the hook for now, Mexico.

Just kidding, you’re still on the hook, but will “pay much less” according to Trump, thanks to his latest scheme.

“We’re thinking of something that’s quite unique,” Trump told a cheering audience. “We’re talking about the Southern border, lots of sun, lots of heat. We’re thinking about building the wall as a solar wall, so it creates energy and pays for itself.”

“And this way Mexico will have to pay much less money, and that’s good, right? Is that good? You’re the first group I’ve told that to, solar wall. Makes sense, let’s see. We’re working it out, we’ll see. Solar walls, panels, beautiful,” he word vomited out.

“I mean, actually, think of it, the higher it goes the more valuable it is, it’s like,” he continued, shrugging and pointing to his head.

“Pretty good imagination, right? Good?” he asked, searching his adoring fan base for the approval he so desperately needs in the face of sagging poll numbers and ongoing investigations into links between his campaign and Russia.

“My idea,” he sadly stressed, leading a nation, aside from the sycophants, cringing.

It’s downright fridge-worthy if you ask his ardent supporters.

In a speech he would never dare deliver in West Virginia, Trump, yes, Trump, old King Coal himself, said solar panels would also add aesthetic appeal to his proposed wall, which just for the record is essentially a physical impossibility, and would require seizing a lot of privately held land. Nothing says we see you, forgotten man, like a federal decree demanding you give up what’s yours because we think our wall would look mighty fine right about where you’re standing.

Trump also celebrated Republican victories in special elections prompted by appointments to the Trump Cabinet, most recently in Georgia and South Carolina, and “new immigration rules” that would require those seeking to enter the country to be able to support themselves financially.

He also noted the presence of Secretary of Commerce Wilbur Ross at the rally, saying he wants rich people, not “poor” people, in positions of power on economic issues in his administration.

Trump also called Washington, D.C. a “swamp,” comparing it unfavorably to places like Iowa, where so-called real Americans, even though he has appointed one career politician after the other to positions of power within his administration.

You can watch him make the remarks in the video below.