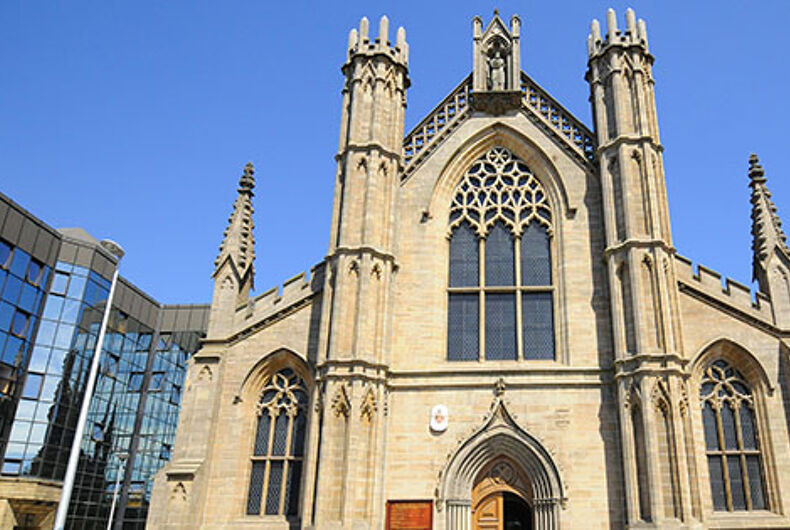 A vote by more than two-thirds of bishops, clergy and lay members meeting at the General Synod of the Scottish Episcopal Church means same-sex couples can now be wed in their churches just like any other couple.

As Pink News reported, 74 percent of the General Synod voted for the motion; 80-percent of bishops and 80.6 percent of laity, which means those who take part in and serve the church but are not ordained clergy. Clerics who will actually have to perform the ceremonies voted in significantly lower numbers in favor of marriage equality: only 67.7 percent, with 32.3 percent opposed.

The final vote tally will result in the removal of official language in church canon, that marriage is between a man and a woman. In its place will be a new section acknowledging there are different understandings of marriage, thus allowing clergy to conduct weddings between same-sex couples.

A spokesperson for the Church of England was reluctant to comment other than to say it was a matter for the Scottish Episcopal Church. But the Most Rev. David Chillingworth — who has been the head of the SEC since 2009 — celebrated the outcome of the vote as “the end of a long journey.”

The step we have taken today is a momentous one.

By removing gender from our marriage canon, our church now affirms, as its official position, that as a same-sex couple are not just married, but are married in the sight of God. They can ‘leave and cleave.’

They can express in marriage a commitment to lifelong faithfulness to one another and to the belief that a calling to marriage is for them too a calling to love, forgiveness, sacrifice, truth.

A new chapter opens up — inclusion has taken a particular form.

Chillingworth added that this vote recognized “marriage of same-sex couples as an expression of Christ-like acceptance and welcome.”

5 ways to avoid burnout while resisting the Trump agenda