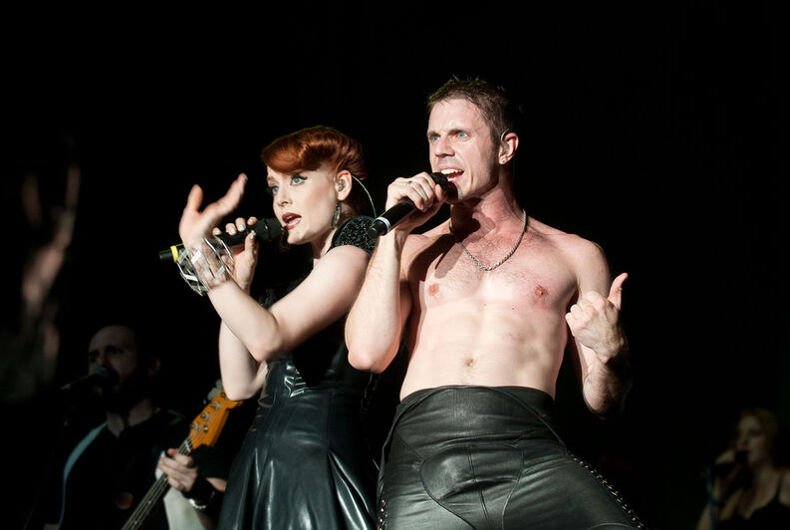 Jake Shears and Ana Matronic of the Scissor Sisters performing in 2010 at the Fuji Rock Festival in Japan.Photo: Tokyo Times on Flickr

Scissor Sisters are back after a five-year hiatus with a new single, “SWERLK.” The band teamed up with producer MNDR and released the track just days before the one-year anniversary of the Pulse shooting, and that is no coincidence.

“It wasn’t just an attack on the LGBTQ community, but on one of its sacred spaces: the dance floor. On the one-year anniversary of the shooting, the two artists are teaming up not just to ensure violence against the gay community is still part of the national dialogue, but to take back the dance floor,” a statement on the website for the track reads.

Proceeds from the song will go to Contigo Fund, an organization that emerged after the Pulse shooting to support LGBTQ and Latinx communities, and to fight racism, homophobia, transphobia, Islamophobia, and other forms of bigotry.

You can listen to the new track below. The word “SWERLK” is a word created by combining the words twerk, twirl, werk, swerve, and swirl.

The band has also released an official lyrics video to go along with the song.

“It’s not only a dance move or a song,” MNDR told Huffington Post. “It’s a way of life and a philosophy!”

“MNDR and I were talking about how we wouldn’t exist without the culture around the clubs and the bars and the kind of escapes they provided and complete support system for what we were both doing when we started our projects,” Scissor Sisters’ Babydaddy said. “So it was this sort of, ‘we’re not just supportive but also in debt to this culture.’”

“I think the most important way for us to kind of fight back and keep the spirit alive was to actually dig deeper into the spirit of what that whole scene, that community is. So, for us, that idea [consisted] of making something that hopefully people want to go out and play in the clubs and have fun with experience,” he added.

The artists are encouraging fans who are able to make donations to Contigo Fund as well.

“Contigo Fund is proud to stand strong with Pulse-affected communities in Orlando in their long journey of healing and empowerment. Support for this work continues to be critical,” the organization said in a statement.