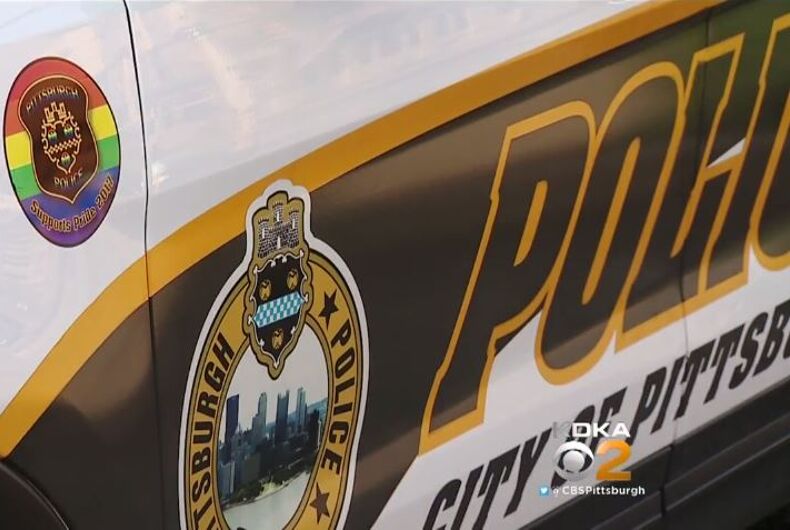 The Pittsburgh Police Department is showing its support for the LGBTQ community by displaying Pride decals on a number of squad cars, and while advocates praise the news, not everyone is pleased.

Most notable among critics is the head of the Fraternal Order of Police (FOP), Bob Swartzwelder, who has released a statement arguing that the outward sign of support crosses the line, WTAE reports.

“A marked police vehicle represents neutrality in the enforcement of the law. Professional Police work improves community relations not car decals,” Swartzwelder said. “Eventually a radicalized group will seek it’s [sic] community inclusion and raise a 1st Amendment issue. When denied it’s [sic] place on the publicly funded vehicle a content based law suit will arise. This action by the police Bureau is a slippery slope. Focus on professional police work…not car decals.”

Police Chief Scott Schubert criticized Swartzwelder’s decision to go to the media to express displeasure over the decals, calling it “very disheartening.”

He added that the decision to place the decals on the car is meant to “help build stronger partnerships with the community we are entrusted to serve and protect” and that the police department is “doing everything in our power to improve those relationships.”

“The FOP is sending a message that has the potential to do reprehensible harm to progress we’ve made to ensure there is inclusion with all members of the community,” he concluded.

Assistant Chief Larry Scirotto said in an email sent to lieutenants and sergeants that he had heard there were some individuals within the department making disparaging comments about the Pride decals and that he expected that situation would be resolved, calling it “unacceptable.”

Scirotto pointed out that the Pride decals are not the only ones place on cars, and that after “careful consideration, we decided we could celebrate various events and convey a positive message to ALL communities.”

The Delta Foundation, the group that organizes Pittsburgh Pride, said in a statement that the Pride stickers could “be a conversation starter, can create an opportunity for education, and will help develop a greater understanding of our differences and what we have in common.”

“We hope that the FOP and all of its members will continue to work to gain a greater understanding of the LGBT community, specifically transgender people, people of color, and under-served members of our community, as they work to protect and serve all residents of the City of Pittsburgh.”

Will a record number of people attend DC pride & the Equality March?