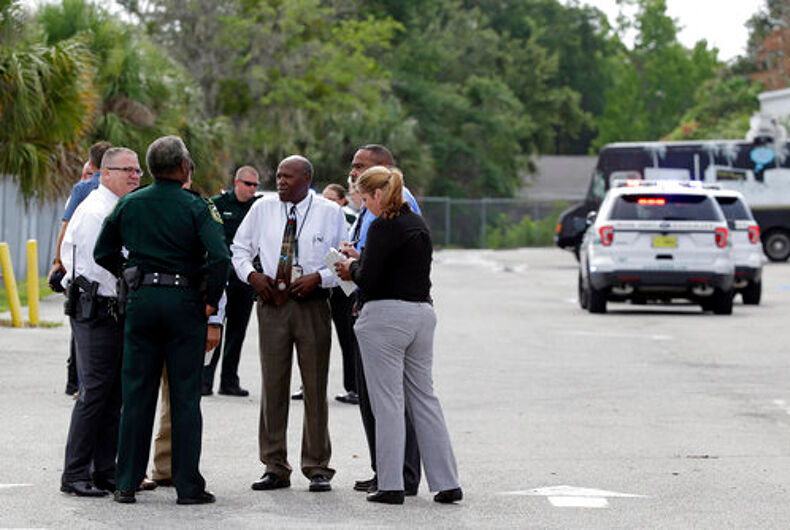 Authorities confer near the scene of a shooting where they said there were multiple fatalities in an industrial area near Orlando, Fla., Monday, June 5, 2017. The Orange County Sheriff's Office said on its official Twitter account that the situation has been contained. Photo: (AP Photo/John Raoux)

Orange County Sheriff Jerry Demings described the shooter as a 45-year-old man who had been fired in April and had been previously accused of assaulting a co-worker. The attacker was not believed to be a member of any type of subversive or terrorist organization, he said.

The man was not charged when he was accused of battering the co-worker in June 2014. That co-worker was not among the victims Monday, the sheriff said.

Shelley Adams said her sister, Sheila McIntyre, called her from the company’s bathroom during the shooting and was upset.

She kept repeating “My boss is dead. My boss is dead,” Adams said after state and federal law enforcement officers converged on the industrial park in Orlando.

Police were called around 8 a.m. by a woman who ran from the awning business, Fiamma Inc., saying the gunman had told her to leave. She used the phone of a tile business across the street to call 911, said Yamaris Gomez, the tile store’s owner.

The sheriff said officers were dispatched within 45 seconds and arrived two minutes later.

Special Agent Danny Banks of the Florida Department of Law Enforcement said that while five people were killed, “seven others’ lives were saved due to the quick actions of the officers who arrived on the scene today.”

Banks and Orlando Mayor Teresa Jacobs both said the attack shows why people need to alert authorities if they learn of anything that could lead to violence.

“If people see something that seems abnormal, they need to say something,” the mayor said.

Fiamma Inc. calls itself one of the largest manufacturers of awnings for camper vans, motor coaches and sports utility vehicles.

Gov. Rick Scott said he had been briefed by law enforcement and that he and his wife, Ann, “are praying for the families who lost loved ones today.”

“I ask all Floridians to pray for the families impacted by this senseless act of violence,” he added.

Republican mayor: Asians, gays & Jesus will save our city