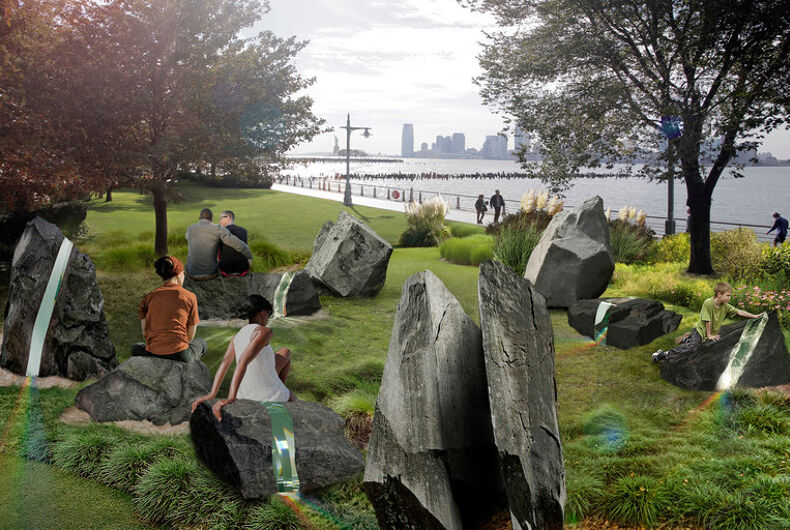 New York Governor Andrew Cuomo unveiled plans for a new monument to be located at Hudson River Park in New York City over pride weekend and it is less than impressive.

The winning design by Anthony Goicolea was inspired by Stonehenge and the Easter Island statues and they are definitely reminiscent of ancient ruins. Made up of nine boulders, the design is supposed to pay homage to the 49 victims of the Pulse nightclub mass shooting somehow. Some of the boulders will have glass inserted into them “that acts as a prism and can emit a subtle rainbow,” according to The New York Times.

“It feels like there are certain shapes and patterns that are encoded in our DNA as humans that transcend any particular culture and speak to how we are unified in the larger scheme,” Goicolea said. “I wanted to create a space that feels familiar, even though it is new.”

“From Stonewall to marriage equality, New York has always been a beacon for justice,” Governor Cuomo said in a statement. “I am now proud to announce Anthony Goicolea’s stunning design for this monument — selected for the way it complements the landscape and communicates a timeless message of inclusion.”

Sure, Stonehenge and Easter Island are “timeless,” but that’s because they’re actually ancient. Scattering rocks around a grassy area is called landscaping.

Still to each their own. A ten member committee picked the design so either a) the other designs were truly horrible or b) I’m not an artist and have no appreciation for a beautiful monument. In all fairness, I must admit, I’m not an artist.

What do you think? Is it awful or awesome?

So excited and honored to have had my proposal selected for the LGBTQ memorial for victims of hate crimes and violence. It is an honor to be part of the LGBTQ community and help represent. Happy gay pride! Thank you Gov. Cuomo! Link in Bio. #lgbtq #lgbtqcommunity #lgbtqcenter #gaypride #gaypride2017 #lgbtqpride #🏳️‍🌈