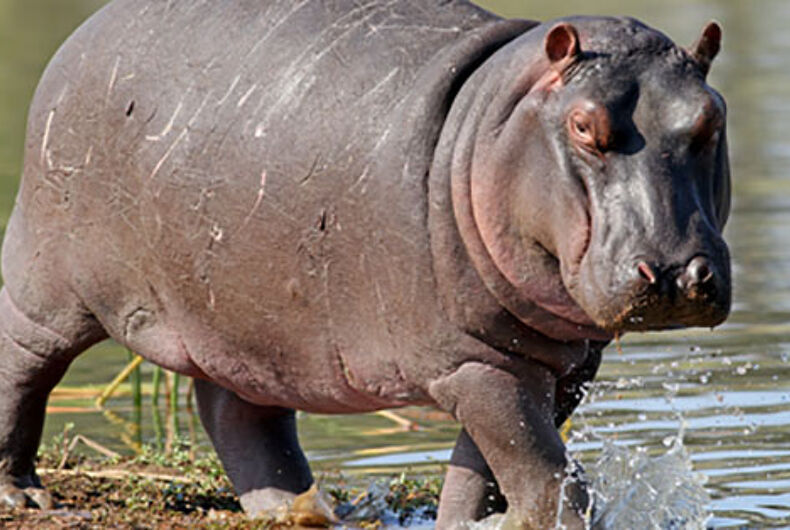 Florentin Félix Morin is a visiting Ph.D. student from France and transgender man, who was invited to visit the campus of the University of Arizona earlier this year, but this week has been relentlessly ridiculed by conservative news media.

He’s become a target of Milo Yiannopoulos, Breitbart, the Daily Caller, the Christian Broadcasting Network and Life Site News for his exploration of a metaphorical concept: what he called the formation of a tranimal alter-ego. Specifically, he wrote in the Journal of Theoretical Humanities, he is a hippopotamus.

“I do strongly love when my friends call me ‘hippo,’ refer to my ‘paws’ and pretend that they see no difference between me and one of my stuffed hippopotamuses, except that I’m a little bigger than most of them,” Morin wrote. “Something about being a hippo makes me feel cute, confident, sexy, and safe. I discovered that another self was available for me: being a hippo means that I don’t have to be a boy or a girl, a child or an adult, normal or strange. It means that my smile becomes a hippo smile, and the way that I carry my body, a hippo walk. It brings me freedom, space, and a thrilling sense of possibility.”

And that, of course, set the LGBTQ community’s online enemies into a fit of gleeful transphobic headlines and photoshopped images, what the university’s media representative called “the conservative outrage spin cycle.”

Lions and Tigers and Tranimals, Oh My: Professor Identifies as a Hippo.

Whatever one thinks of Morin’s philosophical stance on identity, what is indisputable is his affiliation with the University of Arizona… which a spokesperson describes as “nonexistent.”

“That’s the funny part,” Chris Sigurdson told LGBTQ Nation in a phone interview. “The Gender and Women’s Studies Department was excited that someone on the edge of creative thinking would come visit. They put it on the calendar. He visited the campus once and we never saw him again.”

In spite of reports that called him a “visiting scholar,” Sigurdson said Morin was merely “an interesting individual” who neither taught nor attended classes at UA. “None of the work he wrote about was done here. He had no role here. We have a strong academic LGBTQ presence here, but he had nothing to do with it.”

While tracing the evolution of his identity, Morin explained in his paper that he has most recently announced he identifies as “an old butch hippo dyke trapped in a young human faggy transboy’s body (it may sound better in French),” he wrote.

“My hippo ego was first a metaphor,” Morin wrote in his paper, which covers a lot of ground, from transgender identity to lesbianism to feminism, sado masochism, as well as the universe of Harry Potter and what he dubbed the concept of “transpecies.”

I do not experience it as ontologically given, and I am fully aware that I created it with friends and loved ones. It is “merely” an image, but it is at once my shield, my screen, and my skin. My shield, because it linguistically and materially provides me with a way to evade (trans)gender assumptions and injunctions. My screen, because it is an imaginary surface of projection through which I can (dis)organize myself. And hippo is my skin, because it is a vulnerable and meaningful point of contact between my flesh and the (rest of the) world. Hippopotamus: the very word is powerful music to my ears.

Okaaay then. Clearly, this is deep, deep intellectual stuff, folks. So, what is “transpecies?” Hold onto your thinking cap.

Transpecies can be temporarily defined as any literal, figural, metaphorical and/or material migration from a species to another species. Transpecies is concrete, and/or imaginary. Transpecies emphasizes the fluidity and indeterminacy of the process of becoming. It reveals the contingency and reconfigurability of identification and/or embodiment, as the possible hybridizations between human and non-human are infinite. It challenges the idea that there is such a thing as a fully, unproblematically human body.

Morin is attempting to illuminate the concepts of identity, representation and what he calls the “system of obligations” that accompanies being transgender. Challenging the idea that “trans” is an “emancipatory term,” Morin asks, “Can its grip be loosened by the producing of other, maybe less realistic truths? A first view on my animal alter ego would be that it is an attempt to do so: an act of language, a verbal construction that I articulate in protest of a definition of myself as fully contained and explained by the framework of ‘transgender.’”

So, haters, Morin makes it clear he doesn’t literally believe he is a hippo. But admittedly he takes readers on a very convoluted intellectual exercise to make the point that he is more than just the label, “transgender man.”