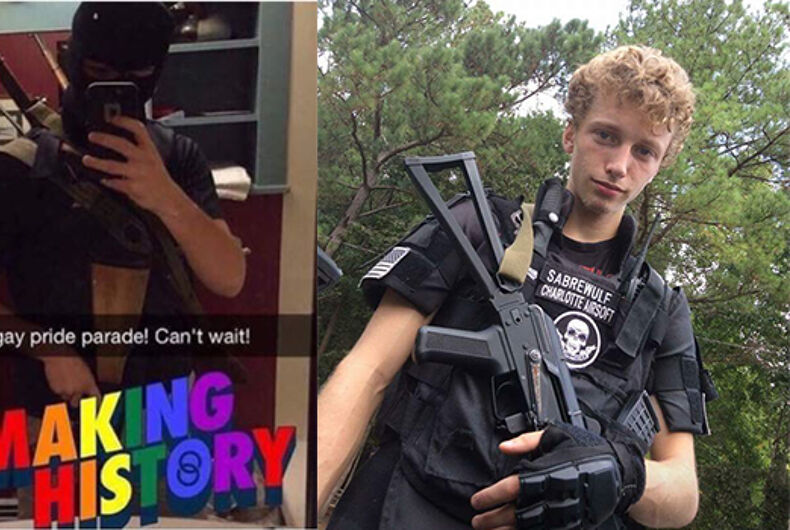 A North Carolina man caused upset and alarm, and was questioned by the FBI over a Facebook post of a meme threatening violence against a Pride parade.

Shelby Evans, of Belmont, shared an image of a man wearing a ski mask, holding a gun, with more strapped to his back, and the words, “First gay pride parade! Can’t wait!”

The group Charlotte Uprising, formed after the police shooting death of Keith Lamont Scott, shared a warning about Evans on their own Facebook page.

“There’s been a significant rise in violent white terrorists since Trump’s election, and so these types of threats or signs of malicious intent cannot be ignored or dismissed as ‘jokes,'” the post reads.

It includes a screenshot of the image in question, as well as other photos from Evans’ Facebook account, including a picture of him holding an Airsoft BB gun.

Evans commented on the post, arguing that he was in fact only joking and was not a dangerous person, writing:

The meme in question features a man taking a snapchat photo with an iPhone, as seen by the Apple logo on the back. This is not me, for I do not own and never will own an iPhone. I prefer Samsungs and LGs. This is simply an image I found on a meme group and is not to be taken as a threat. I’m sorry if this image is deemed offensive or threatening by a liberal revolutionary​ group, but humor is a very subjective emotion. What may be funny to me, may not be funny to others. As stated, I have neither the time, means, or intent to harm anyone until absolutely forced to do so to protect myself, my home, and my family.

Other commenters said they had reported the image to local law and federal law enforcement agencies.

Local FBI agents told the Charlotte Observer that they had worked with local law enforcement to determine that the post does not qualify as a credible threat.

Evans told LGBTQ Nation that he had been contacted by the FBI and had been cleared of any wrongdoing, and stressed yet again that he is not violent.

“I’ll say that I definitely​ would not have posted it had I known that there actually WAS a pride parade this weekend,” Evans said by email.

“I do not condone or promote violence or terrorism, but under the right context, some laughs may be had,” he continued. “I spoke extensively to an FBI agent yesterday evening and explained my situation. He cleared me and did not confirm nor deny whether or not I am being watched. I think I am, but I am not one hundred percent certain.”

“All else I will say is what I have said before; that I am no terrorist,” he concluded.

Evans also posted on Facebook about the incident, accusing Charlotte Uprising of invading his privacy, even though he made the posts on a public forum.

Belmont is a small town less than 15 miles from Charlotte. While June is recognized nationally as Pride month, most Pride parades and events in North Carolina are happening later in the year, with Charlotte’s taking place in August.

There have been threats of violence against Pride events in the past. An event in College Station, Texas was cancelled due to an online threat last year, and a man was arrested heading to the Los Angeles Pride parade with a loaded assault rifle and chemicals ready to mix for explosives.

This threatening post also comes shortly before the one year anniversary of the mass shooting at the LGBTQ nightclub Pulse in Orlando.

The Charlotte Observer reports that a similar situation to this one took place in Massachusetts a couple of months ago, with police searching a high school student’s home under suspicion that he could be a threat to others after he shared the same image Evans posted.