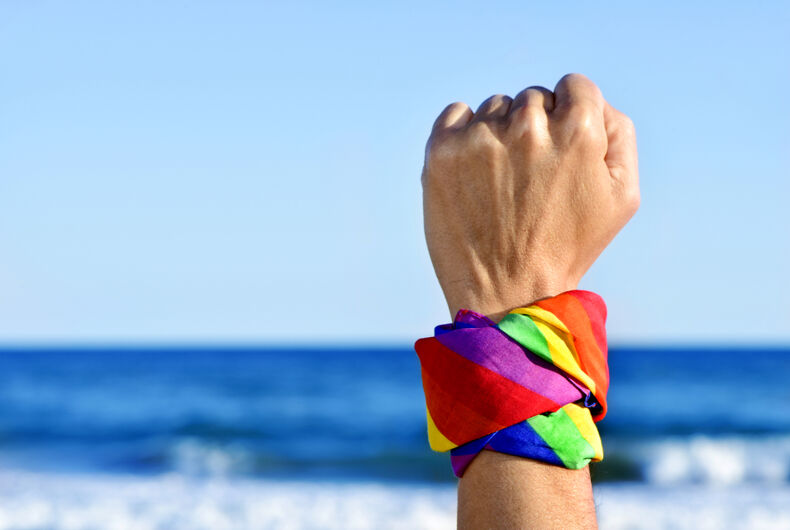 Boy, the idea that LGBT people use the rainbow to illustrate our inclusive solidarity really bothers some people. While ancient Jews explained the natural phenomenon by saying it was a sign of God’s love and that he wouldn’t destroy the world, some Christians seem to believe that using it as a symbol of love will, well, cause the end of the world.

Writing for the WorldNetDaily, Harvey complains that “the sweet rainbow image has been violated, raped by the deluded and fraudulent, and it now serves too often as a garish signpost for slavery to grave homosexual sin. It’s clear God did not intend for the rainbow to represent rebellion, iniquity and division. So how did this precious symbol become the banner, with few objections, for human depravity, lust, defiance and heresy?”

While the correct answer is obviously, Gilbert Baker designed it, people liked it, and it spread worldwide as a symbol of hope and love. Harvey, however, is pretty sure it’s all about logos and branding.

“The mightiest logo of all time is the cross, where Christ shed His blood for the world’s sin and God transformed the tool of torturous execution – what Satan intended for destruction and permanent humiliation – into eternal hope for all who would believe in Jesus,” Harvey writes.

This, she argues, is why “atheists” demand Christian crosses be removed from public spaces – the branding is too powerful. And since the “depraved” sue to get religious iconography removed from government property, she should be able to sue to get all rainbow flags removed from cities and rainbow merchandise yanked out of private businesses. Why? She could trademark the rainbow as a Christian brand.

Eventually, even Harvey realizes how batshit crazy her argument is, admitting, “So maybe the rainbow couldn’t be trademarked by believers, but why wouldn’t offensive speech/symbol protection extend to crosses in public parks? If some spiritually blinded people can’t see the beauty of the cross, but instead fear it, that is indeed their problem.”

So what’s the solution to the rainbow problem? Changing the colors to something else, of course.

Its current misuse needs to end. Rainbows should accompany what God would smile on. God is not smiling on homosexual conduct, gender defiance or the corruption of children, and He never will.