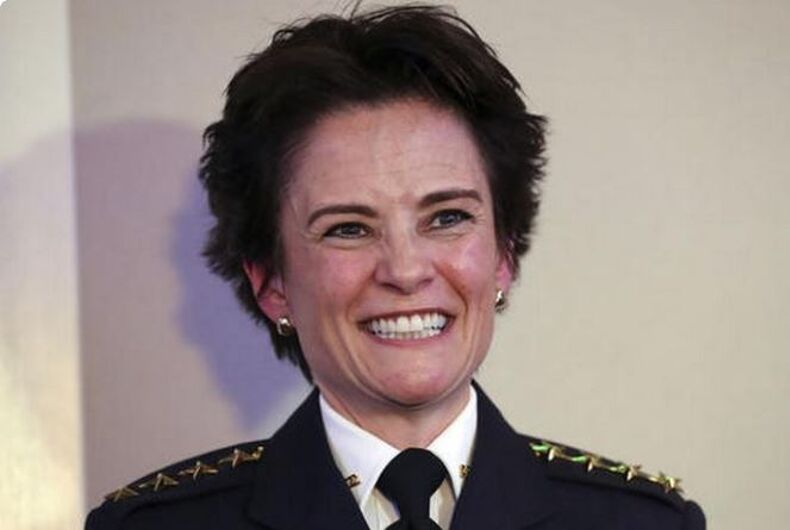 In this Jan. 10, 2017 file photo, Atlanta Chief of Police Erika Shields smiles during her oath of office ceremony at the Commerce Club in Atlanta.Photo: Curtis Compton/Atlanta Journal-Constitution via AP, File

Atlanta’s chief of police, Erika Shields, has come out as a lesbian in a magazine profile, making history as the first openly gay individual to rise to the top of the department in the city.

Shields, who was appointed as police chief to replace the outgoing George Turner by Mayor Kasim Reed in December, is described by Atlanta magazine as openly gay:

In the waning months of a lame duck mayor’s term, a time when other city officials are packing their boxes or polishing their resumes, Shields, the APD’s first openly gay chief and the second woman to lead the force, is chipping away at an ambitious agenda for the 1,850-officer department—one that could please both policing reform advocates and cops.

ProjectQ Atlanta notes that this is likely the first public confirmation that Shields is a lesbian.

Shields looks to reduce gun violence, divert money from low-level crimes to more serious offenses, and deter juvenile offenders, but just how long she’ll be in office and able to work on those goals remains to be seen.

Shields’s job security expires in January, when Atlanta’s new mayor takes office. It’s anyone’s guess who will win the job—and whether they will follow a 40-year tradition and appoint a new chief. Shields says she is focused on her agenda.

The Atlanta Police Department has a complicated relationship with the LGBTQ community after the 2009 raid on the gay bar Atlanta Eagle.

Police were reportedly looking for drugs, and threw patrons to the ground. The incident led to a lawsuit, and the firing of six police officers, as it was found that patrons’ civil rights had been violated, and anti-gay slurs had been used by police during the bogus raid.

Shields, who served as Turner’s chief of staff at the time of the raid and was tasked with dealing with the aftermath, said in December that she believes much progress has been made since.

“I think we have made enormous inroads and the first step in the process is that the department as a whole acknowledging that we had come up short and that we were to blame,” she said. “And that process took awhile.”

“We are in a completely different space in so far as the LGBT community is concerned. We are actually asked to train abroad on bias crimes on a regular basis by the State Department,” Shields added.

We have contacted the Atlanta Police Department for comment and will update in the event of a response or statement.