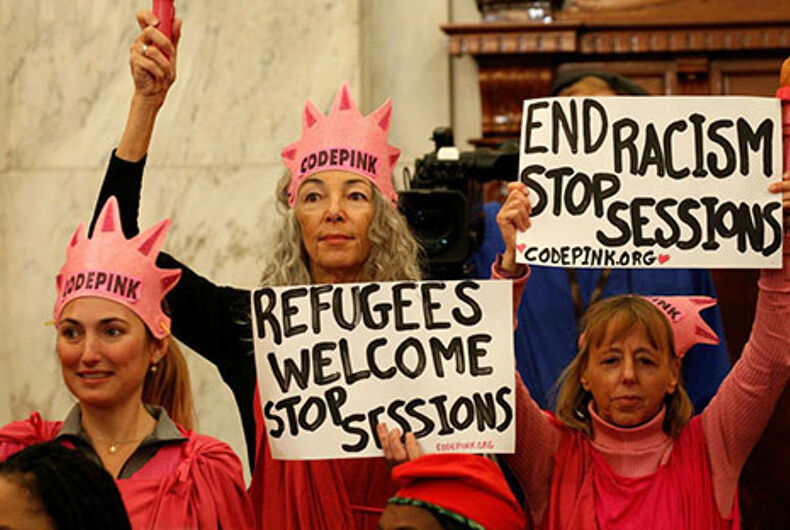 A woman who laughed at the confirmation hearing of Attorney General Jeff Sessions has been found guilty of charges of disorderly conduct, among other violations, and could face up to a year in prison.

Desiree Fairooz, 61, an activist with the group Code Pink, was moved to laughter on Jan. 12th by Sen. Richard Shelby of Alabama, who said Sessions has a record of “treating all Americans equally under the law is clear and well documented.”

Two other Code Pink demonstrators, Tighe Barry and Lenny Bianchi, were charged as well. They too could face up to a year in prison, or, like Fairooz, $2,000 in fines, or both. The men were dressed in Ku Klux Klan-style outfits, drawing attention to the fact that Sessions once said, after the KKK killed an African American man in Alabama, that he thought they were, “Okay, until I found out they smoked pot.”

Sessions was also once refused a federal judgeship due to allegations of racism, and Sen. Elizabeth Warren was silenced on the Senate floor when she tried to read the letter Coretta Scott King wrote outlining the ways in which he had used his power to intimidate and frighten black voters.

Another protester escorted out of Sessions hearing. Her original offense appeared to be simply laughing. pic.twitter.com/p6lWzBVFRW

In addition to the disorderly conduct charge, the jury found Fairooz guilty on charges of parading or demonstrating on capitol grounds, both of which are misdemeanors.

Jurors who spoke anonymously to HuffPost said her behavior when asked to leave, not her laughter, was what resulted in her conviction.

Fairooz told The New York Times she is “really disappointed” by the verdict and that her lawyers plan to file post-trial motions to have it set aside, adding that it is too soon to consider an appeal.

“I felt it was my responsibility as a citizen to dissent at the confirmation hearing of Senator Jeff Sessions, a man who professes anti-immigrant, anti-LGBT policies, who has voted against several civil rights measures and who jokes about the white supremacist terrorist group the Ku Klux Klan,” Fairooz said in a statement prior to the reading of the verdict.

Prosecutors said they brought charges because her laughter was an attempt to “impede, disrupt, and disturb orderly conduct” of the hearing.

Attorney General Jeff Sessions backed away from transgender student protections almost immediately after being confirmed, in but one example of why Fairooz was justified in laughing at the notion that he would respect the rights of all Americans.

Fairooz said she will continue to protest the Trump administration, saying she is “so disgusted with so many different aspects of our current government.”

A sentencing hearing is set for June 21.