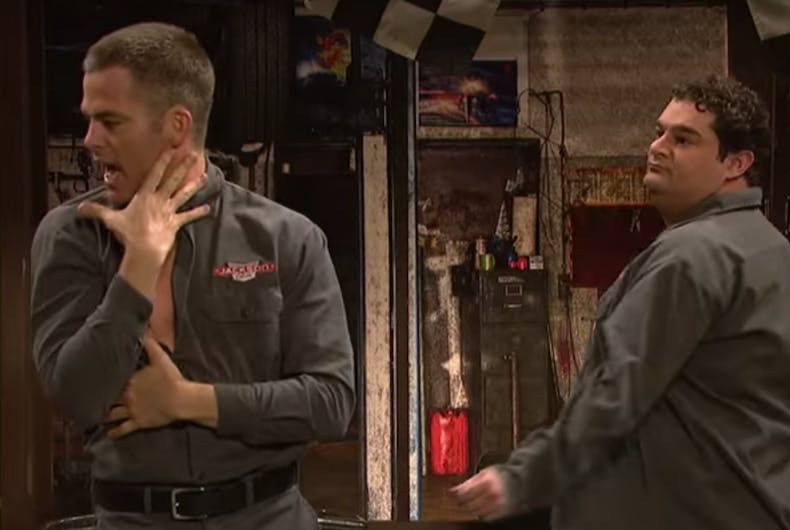 RuPaul’s Drag Race isn’t for everyone. No shade, facts are facts. But you can’t always tell who’s a fan by looking.

The revelation occurs after the guys find themselves bored with the regular break room chit chat about food. Pine’s character nonchalantly mentions that he caught this show on TV the other night about drag queens — “I guess that’s what you call them” — only discover he’s not the only one who “accidentally” found himself watching the gayest show on television.

“My girlfriend watches that,” one guy chimes in. “I think it’s on VH1 now?”

One by one, each mechanic mentions something about the show while simultaneously attempting to distance himself from it. But before long, it becomes clear they are not only familiar with the show, they are well-versed on the quality of one contestants tuck — which Pine describes as “when you tape your hot dog down between your buns so you have that flat crotch look.”

It’s becomes clear that their not only fans, they have opinions about the queens.

“I don’t care how good Trinity Taylor’s tuck is. She’s from the pageant circuit and those bitches never win,” one mechanic, played by Bobby Moynihan, notes. “Or at least that’s what people who watch the show have said around me, I guess.”

They even bust out some drag slang, educating each other on what it means to serve “fish.”

Eventually, one of the guys brings the T: They all watch Drag Race and they love it. After that, everyone relaxes. Moynihan’s character mentions that the show has made him wonder, “How would I lip sync for my life?” Before long, he issues a challenge, and Pine gladly accept.

Watch the guys battle it out to Erika Jayne’s “#XXPENsIVE” as they attempt to twerk and twirl.

Bonus: Check out the short but sweet Carmen San Diego-inspired sketch “Where in the World is Kellyanne Conway.”

When it comes to Republicans, ‘pro-life’ politics expire at birth