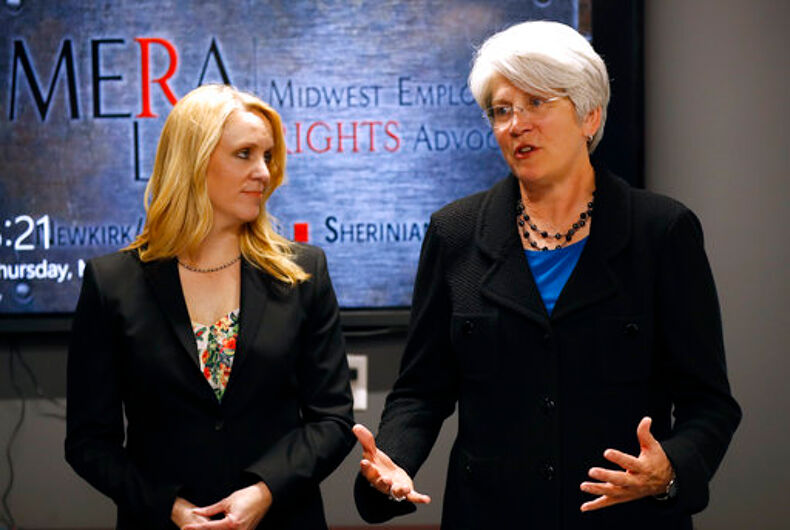 In this May 4, 2017, file photo, Jane Meyer, former senior associate athletic director at the University of Iowa, speaks during a news conference as her attorney Jill Zwagerman, left, looks on in Des Moines, Iowa. The University of Iowa will pay $6.5 million to settle high-profile discrimination lawsuits filed by former athletic administrator Jane Meyer and her partner, former women's field hockey coach Tracey Griesbaum, according to settlements released Friday, May 19, 2017. Iowa will pay $2.33 million to Meyer, $1.49 million to Griesbaum and $2.68 million to Newkirk Zwagerman, the Des Moines law firm that represented both women. In exchange, Meyer and Griesbaum will drop their lawsuits and requests for reinstatement.Photo: AP Photo/Charlie Neibergall

Iowa will pay $2.33 million to Meyer and $1.49 million to Griesbaum to cover lost wages and emotional distress damages. The school will also pay $2.68 million to Newkirk Zwagerman, the Des Moines law firm that represented both women. In exchange, Meyer and Griesbaum will drop their lawsuits and requests for reinstatement.

Polk County jurors earlier this month found that Iowa illegally discriminated against Meyer based on her gender and sexual orientation, retaliated against her for speaking out and paid her less than deputy athletic director Gene Taylor, awarding $1.45 million in damages.

Meyer’s attorney, Jill Zwagerman, said the settlement “plants a firm stake in the ground for equality and opportunity in women’s athletics.”

“This settlement speaks volumes not just here in Iowa but to countless other women in collegiate athletics,” she said.

Meyer’s damages were expected to grow during post-trial motions but the settlement avoids further litigation on those issues. Meyer will also drop a separate federal lawsuit.

The settlement avoids a June trial in the lawsuit brought by Griesbaum, whose 2014 firing by Barta was at the heart of both cases. That trial promised to be damaging as Griesbaum’s lawyers were planning to argue that Barta was quicker to fire gay, female coaches than their male counterparts, a charge he has denied.

Griesbaum’s attorney, Tom Newkirk, said that Iowa “should not be vilified as an educational institution for the actions of one or two people.” He said the school appears to be making corrections under President Bruce Harreld, who approved the settlements and has announced plans to hire an outside firm to review its employment practices.

The payouts will come from the athletic department, which doesn’t receive tax dollars but is funded largely through broadcasting revenues and ticket sales.

“We are pleased to have this behind us and looking forward to participating in the external review of our employment practices,” Barta said.

An inquiry continues by the U.S. Department of Education into discrimination complaints filed by former female athletes who were angered by Griesbaum’s firing.

Testimony at Meyer’s trial showed that Barta hired Taylor into a new position to take over some of Meyer’s duties — with a salary $70,000 higher than hers.

On Taylor’s first day in August 2014, Barta terminated Griesbaum without cause, paying a $200,000 buyout. Barta said he acted over concerns about Griesbaum’s treatment of some players, although a university investigation found no policy violations. Meyer was infuriated by the firing, directly challenging Barta.

Meyer and Griesbaum have been in a relationship since 2004 in which they live together but aren’t married. They had disclosed their relationship years earlier to a university official, who told them it didn’t conflict with policy because Meyer wasn’t Griesbaum’s supervisor. But they said that they kept it largely quiet, in part to avoid challenges in recruiting.

In December 2014, Barta transferred Meyer to a university job outside athletics, saying she couldn’t remain in the department while her partner was threatening a lawsuit. Meyer was laid off last year after her job was eliminated.

At trial, the university painted Meyer as a difficult employee who became a workplace disruption after Griesbaum’s firing. Football and wrestling coaches testified about some problems they had with her, but Barta largely failed to document performance concerns.