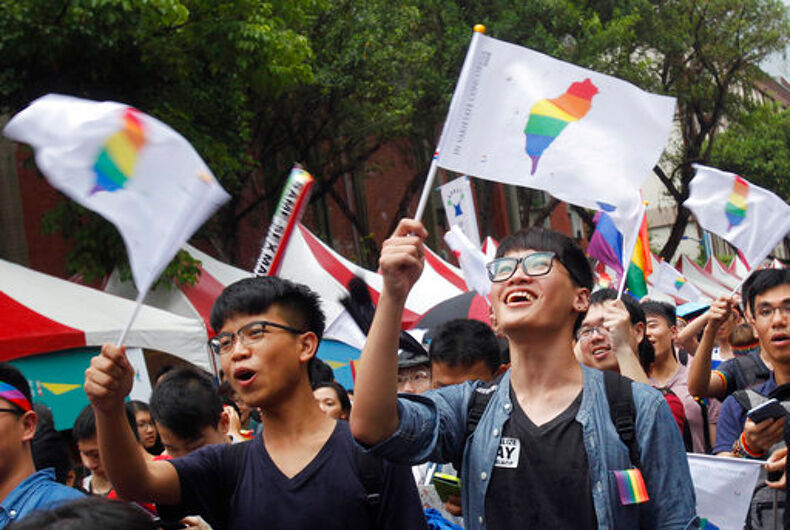 FILE - In this Wednesday, May 24, 2017, file photo, same-sex marriage supporters wave rainbow Taiwan flags after the Constitutional Court ruled in favor of same-sex marriage outside the Legislative Yuan in Taipei, Taiwan. The court ruling Wednesday affirmed the right of same-sex couples to register their marriages, a first in Asia and one that will likely give encouragement to China’s burgeoning gay rights movement, given the cultural ties between the two. Photo: (AP Photo/Chiang Ying-ying, File)

A first-ever ruling in favor of same-sex marriage in Asia. A public caning in Indonesia. A soldier convicted in South Korea.

For LGBT rights, it was one step forward, two steps back this week in Asia, where traditional values often clash with modern views on lesbian, gay, bisexual and transgender issues.

The developments followed the arrest in Bangladesh last week of 27 men on suspicion of being gay, though police said they would be charged with drug possession since they were detained before they engaged in sex.

First came a police raid on a gay sauna and gym in Jakarta, the Indonesian capital. Then the public caning of a gay couple for consensual sex in Aceh, a remote Indonesian province that practices Shariah law.

More than a thousand people packed a mosque courtyard Tuesday to witness the caning. The crowd shouted insults and cheered as the men, aged 20 and 23, winced in pain while they were whipped 83 times across the back.

“What they have done is like a virus that can harm people’s morale,” said Sarojini Mutia Irfan, a female university student who witnessed the caning. “This kind of public punishment is an attempt to stop the spread of the virus to other communities in Aceh.”

Outside of Aceh, homosexuality is not illegal in Indonesia, but the country’s LGBT community has come under siege in the past year.

Strident anti-gay comments from high-profile politicians and Islamic hard-liners have fanned prejudice. A case before the country’s top court seeks to criminalize gay sex, as well as sex outside marriage.

Police detained 141 men Sunday evening at the sauna in Jakarta and charged 10 with violating pornography laws. The raid followed the arrest last month of 14 men in Indonesia’s second-largest city, Surabaya, at what police say was a sex party.

The pressure looks set to increase. Police in West Java, the country’s most populous province, announced Wednesday the creation of a task force to search for and monitor gyms and other locations that hold LGBT parties. The police chief urged communities to report such activity.

A Taiwan court ruling Wednesday affirmed the right of same-sex couples to register their marriages, a first in Asia and one that will likely give encouragement to China’s burgeoning gay rights movement, given the cultural ties between the two.

The Constitutional Court ruling also underscores the stark differences between self-governing Taiwan and China, which considers Taiwan a breakaway territory.

Taiwan has evolved into a freewheeling democracy over the past three decades with a vibrant civil society, a high proportion of women in politics — including the current president — and broad acceptance of international cultural values.

China, in contrast, remains an authoritarian society where the Communist Party brooks no challenge to its strict control over political and social life.

The removal of homosexuality from the official list of mental illnesses in 2001 and an end to routine harassment of gays meeting in public has made life easier for many. However, the ruling party’s inherently conservative nature and strong societal pressure to marry and produce offspring remain impediments to greater freedoms.

Gay activists in China have become increasingly emboldened in recent years, staging small-scale public events and rallying behind unsuccessful legal cases on same-sex marriage and transgender rights, but they remain far from enjoying the high profile and legal protections of their counterparts in Taiwan.

“At least more Mandarin speakers can talk of equality,” said Sean Howell, president of the international gay social network Hornet that has been campaigning for marriage equality in a number of Asian countries. “Achieving marriage equality in one country in Asia will help all around.”

A South Korean military court sentenced an army captain Wednesday to a suspended prison term for having sex with a fellow male soldier.

The case was one of several that came to light last month, triggering allegations by a watchdog that South Korea’s military was hunting down and prosecuting gay servicemen. South Korea’s army has denied that, saying it was conducting a criminal investigation of soldiers who posted a video on the internet of two male soldiers having sex earlier this year.

The stigma is amplified in the military, where most able-bodied South Korean men are required to serve about two years as the country maintains a large force in the face of potential conflict with North Korea. Gay men are not exempt from conscription but are banned from engaging in homosexual activity while serving, leading them to keep their identity secret for fear of discrimination and reprisals.

Kim In-sook, a lawyer for the captain, said the military penal code, which makes homosexual activity punishable by up to two years in prison, is unconstitutional because it tramples on basic human rights and dignity.

She said it’s unclear whether her client would appeal because he felt tormented by the legal process. He will be dishonorably discharged if the ruling stands.

Why are Texas Republicans so obsessed with what you do in the bathroom?