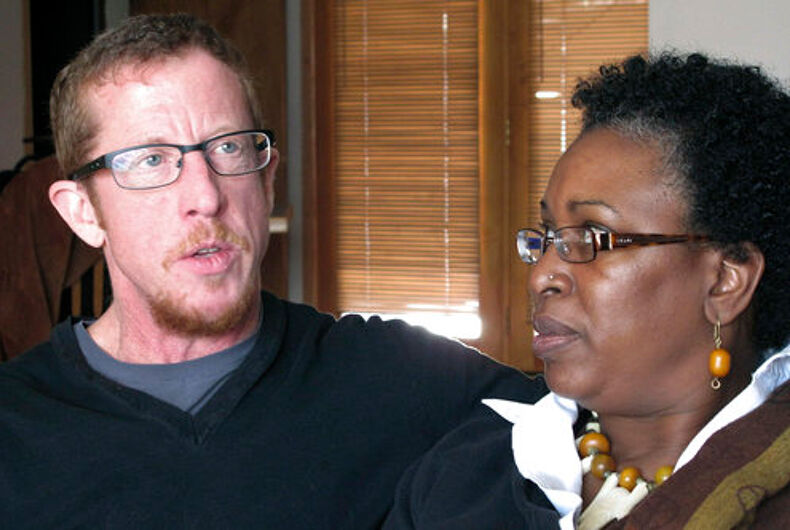 FILE - In this March 30, 2012, file photo, Drew Phoenix, left, and his girlfriend, Ellen Robertson, talk about a ballot initiative going before local voters that calls for equal legal protections for gay and transgender residents, in Anchorage, Alaska. The Alaska Legislature on Tuesday, May 16, 2017, rejected the appointment of Phoenix, a transgender man, to serve on the state's human rights commission. In a phone interview Tuesday evening, Phoenix said he was "incredibly upset and disheartened" by the vote. Photo: (AP Photo/Rachel D'Oro, File)

The Alaska Legislature on Tuesday rejected the appointment of Drew Phoenix, a transgender man, to serve on the state’s human rights commission.

The vote came near the end of an hours-long joint session called to consider Gov. Bill Walker’s nominees to boards, commissions and administration posts. Phoenix was the only nominee to be voted down.

Leading up to the vote, some conservative groups sought to paint Phoenix, who has advocated for LGBT rights, as too political for the post.

Sen. John Coghill, a Republican from North Pole, said there’s no problem with being an advocate “until you get on that commission and then what you want to do is you want to look at protecting all rights.”

Sen. Bill Wielechowski, an Anchorage Democrat who supported Phoenix’s nomination, asked whether the state is willing to appoint people to boards and commissions who understand discrimination first-hand and will work to end it or if people want to live in a state intolerant of those different from the majority or who have different views.

In a phone interview Tuesday evening, Phoenix said he was “incredibly upset and disheartened” by the vote.

“I just find it so ironic that somebody like myself, with so much years’ experience personally and professional working on behalf of human rights, that they would not confirm me to the commission on human rights,” he said.

Phoenix thanked Walker “for having faith in my qualifications.”

“I’m so sad I won’t be able to use my expertise and experience to advance the work of the commission,” Phoenix said.