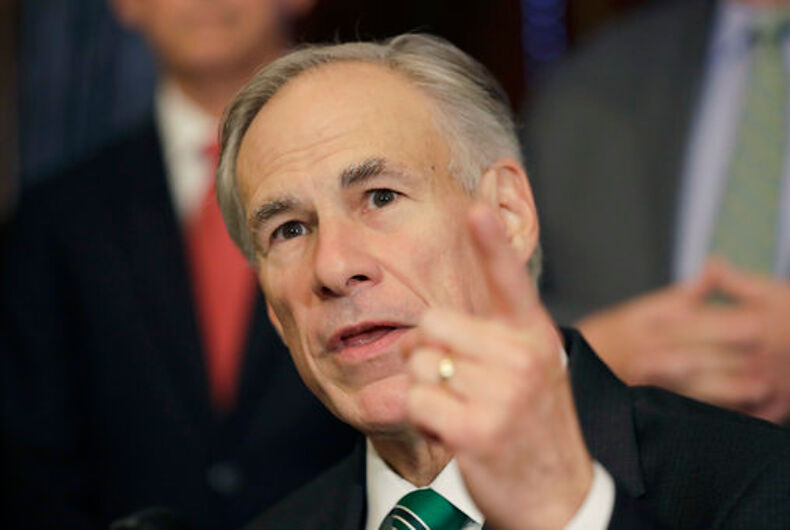 Texas Gov. Greg Abbott speaks during a ceremony where he signed SB7, a bill to address inappropriate teacher-student relationships, at the Texas Capitol in Austin, Thursday, May 25, 2017, in Austin. Photo: (AP Photo/Eric Gay)

As “bathroom bills” targeting transgender individuals falter across the U.S., fizzling even in conservative bastions like Kansas and Arkansas following the upheaval over a North Carolina law last year, Texas Republicans are doubling down in their determination.

The resolve to make Texas only the second state to restrict bathroom access for transgender persons before Monday — when lawmakers adjourn until 2019 — is raising the possibility of a special session and exasperating business groups and LGBT rights organizations that have united in opposition for months.

Republican Gov. Greg Abbott said Thursday enough time remains for lawmakers to strike a deal. He said Texas must address student “privacy, safety and security” but didn’t say how far a bill must go — including whether it must require transgender people to use bathrooms that correspond with the sex on their birth certificate.

Hours later, the state Senate rejected a version of LGBT restroom restrictions meant to apply only to public schools that the House passed last weekend, and asked for a conference committee. The Senate previously approved broader rules requiring all transgender Texans to use public restrooms corresponding to the genders on their birth certificates, and those differences will have to be reconciled.

But any version that emerges would make Texas the first state to pass a bill reminiscent of North Carolina’s controversial 2016 law that was partially repealed in March following intense political and economic backlash.

More than a dozen states this year considered bills restricting bathroom access for transgender people, including Kansas, where the GOP-controlled House this week refused to debate a “bathroom bill” amendment proposed by a freshman legislator.

It was emblematic of what LGBT rights groups say has doomed most efforts outside Texas: a lack of buy-in from Republicans in charge.

Abbott, a social conservative presiding over his last legislative session before he faces re-election in 2018, has gone against his Republican peers by calling for such a law. Governors in Arkansas and Kentucky have rebuffed the efforts as unnecessary, and South Dakota’s Republican governor vetoed a proposal in March.

They watched as Republican Pat McCrory, who signed and defended the North Carolina bill as governor, became the only incumbent governor in the U.S. to lose in the general election last year.

But Abbott has become vocal in the final weeks of Texas’ legislative session.

“We want to do all we can to help women have privacy, safety and security to the fullest extent possible,” Abbott said Thursday.

Opponents have challenged Republicans on such assertions, calling them baseless and noting laws are already on the books when it comes to safety in bathrooms.

The determination for a Texas bill began with Republican Lt. Gov. Dan Patrick, who controls the Senate and led Donald Trump’s presidential campaign in Texas.

Patrick is popular with conservative activists who drive Texas politics but has denied eyeing higher office in 2018, including speculation of challenging Abbott. Patrick has signaled willingness for a special session over a bathroom bill, although only Abbott can make that call.

The Senate’s original bill was similar to North Carolina’s and Patrick has rejected the House’s weakened version, though compromise is still possible in conference committee.

“Frankly some of the other threats in other states rang pretty hollow in a state like Texas,” Republican Sen. Larry Taylor said. “They make more off of us than we make off of them.”