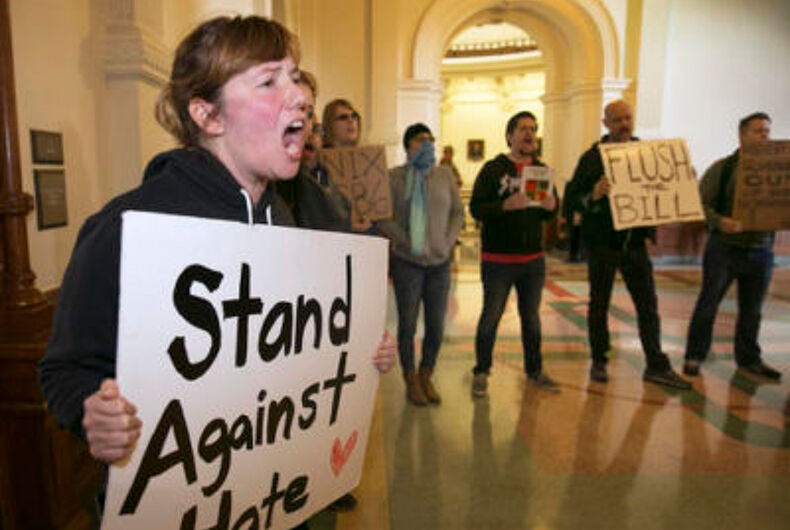 The path for Texas to enact its version of a North Carolina-style bathroom bill is poised to get far tougher after the Republican-controlled state House ran out the clock Thursday on a key midnight bill deadline.

A proposal mandating transgender people to use public restrooms according to their birth certificate gender sailed through the Texas Senate weeks ago, but a similar measure that bans schools and local communities from passing ordinances to protect LGBT rights in bathrooms has been bottled up in the House. That’s despite Republican Gov. Greg Abbott urging fellow members of his party to support it and even calling pastors at top evangelical churches around the state to increase public pressure.

Outnumbered House Democrats have been using tactics to delay a vote on this and other hot-button issues since late last week. House Speaker Joe Straus, a San Antonio Republican who sees the bill as bad for business, hasn’t intervened.

Bills not approved by midnight aren’t dead, but need some maneuvering to live on.

Top firms and lobbyists have opposed the bathroom bill. Many Hollywood actors and music stars have suggested state boycotts, and the NFL and NBA have warned about canceling future Texas events if it passes.

State Rep. Ron Simmons, who has been the issue’s top House champion, said supporters will now look to attach public bathroom restrictions for schools onto education legislation — even if wider bans fizzle.

“I think the likelihood of something getting passed this session as it relates to schools is pretty good,” said Simmons, a Republican from Carrollton in suburban Dallas. “We’re looking for opportunities to amend to other bills that would allow us to be able to protect the school scenario, which is where our number one concern is.”

Texas’ legislative session ends May 29, so while there is still time, it’s beginning to run short. Efforts to save the bathroom bill will have to compete with other conservative priorities that have bogged down, including efforts to further restrict abortion in the nation’s second-largest state.

Top Republicans vowed to hit back at the U.S. Supreme Court, which last summer struck down most of Texas’ tough 2013 abortion law, which caused about 20 clinics around the state to close. As stalling tactics became more widespread, a series of Republics took to the floor to lament “pro-life bills dying.”

One abortion bill that did get approved Thursday requires medical clinics to offer quick, detailed reports of any complications from abortions, and have Texas’ health department produce an annual report compiling that data. Another removes ectopic pregnancy surgery from the state definition of abortion. Ectopic pregnancies occur when an egg is fertilized but attaches itself somewhere other than a woman’s uterus. Such cases require tissue removal via surgery. Neither of those bills has been lauded by anti-abortion activists as major wins.

Democrats delayed other hot-button bills with lengthy debates on noncontroversial issues. The slow pace kept tensions on the House floor relatively low and there were few protests in or around the state Capitol, where groups both supporting abortion rights and opposing the procedure have staged small demonstrations throughout the session.

“It’s no secret the legislative process in Texas is designed to kill more bills than pass bills and that’s why these deadlines are in place,” said Rep. Chris Turner, of Grand Prairie, who heads the House Democratic Caucus.

Asked about legislation surviving in different forms he said, “We’re always on the lookout for any amendments that are harmful to the state and the so-called bathroom issue is certainly near the top of that list.”

The Democrats’ new CEO is a power lesbian

Polling shows Americans are more accepting of gay people than ever